Why Immigrant Kids Excel: They are NOT Tiger Parented - New Canadian Media

Let’s be serious. Most immigrant parents do not have the time, money, resources, or will to be over-controlling, hovering, tiger parents. As the child of immigrant parents from India, I find it hard to sit quiet while the intelligence, commitment, life experiences and core values of hardworking immigrant parents are bypassed, and the credit for their children’s success is given to an overbearing parenting style, or forced into an elusive “Triple Package” of neurotic combinations (a superiority complex, insecurity and impulse control) as suggested by Amy Chua’s book, of the same name and co-written with her husband Jed Rubenstein.

The Economist, New York Times and other media have all brought attention to an achievement gap that can exist among some children of immigrants and other children. However, identifying the reason for this occurrence as being “The Revenge of the Tiger Mom”, as the Economist magazine dubbed it, is a gross oversimplification of a complex set of factors. In fact, the hyper-competitive, over-instructing, “all about me” Tiger parent is the exact opposite of what  leads immigrant kids to succeed. Here is why.

And, more important, harsh Chinese-American parents end up with children who were just as miserable and rudderless as the children of tiger parents from other ethnicities. The children of parents whom Kim classified as “tiger parents” had lower academic achievement and educational attainment, as well as greater psychological maladjustment and family alienation than the children of parents characterized as “supportive” or “easygoing”. The children of supportive parents had the best developmental outcomes, as measured by academic achievement, educational attainment and family integration. These children also avoided the academic pressure, depressive symptoms and parent–child alienation suffered by their tiger peers.

“There is no question that when we measure success as progress from generation to generation, Mexican-Americans come out ahead.” – Researcher Jennifer Lee

In addition, Chinese kids are not even the immigrant group making the biggest leaps in success – Mexican kids are (and they don’t have tiger parents either). In a study published in the Journal of Race and Social Problems, lead researcher Jennifer Lee concluded, “There is no question that when we measure success as progress from generation to generation, Mexican-Americans come out ahead.” When it comes to the rates of college admissions, Mexican children double the rates of their fathers, and triple that of their mothers. When a child, whose parents have never seen the inside of a classroom (except perhaps to come and clean it like my mom and many other immigrant women did), attends post-secondary education that is self–motivation.

They are more likely to need constant entertainment and stimulation and are at higher risk of developing conditions such as overeating, overspending and dysfunctional thinking, such as increased depressive thoughts. In fact, the increase in more permissive parenting in each successive generation from immigration is correlated with an increase in youth behavioural problems.

Immigrant Parents do not Over-parent

Over 10 years, as the medical director of child and youth mental health for the culturally diverse city of Vancouver, I have worked with thousands of families from various economic and cultural groups. I have seen firsthand how over-scheduling (leading to burn out), over-instructing (leading to a lack of independent problem solving) and over-protecting kids (leading to fragile kids that lack resilience) are all underpreparing kids for a rapidly changing 21st century by interfering with their ability to adapt.

Not surprisingly, the ability to adapt came up on top as a key determinant of success as identified by the most comprehensive study on human achievement to date. The sheer practicality of establishing security in a new country obstructs many immigrant parents from this disturbing trend of “over-parenting” and creates an environment where children live outside of “a bubble” and thus learn to adapt.

As a child, without constant schedules, instruction and hovering parents, I played freely and vigorously… Free, unstructured play is directly linked to the development of our brain’s pre-frontal cortex.

My own immigrant parents didn’t have the time, money or interest to drive me around to “activities” and thus I was never in a single one. Instead, I drove around in my dad’s taxicab and learned a lot of math, communication and critical thinking skills that way. I translated English for my mom and likely benefitted from the brain boosting aspects of bilingualism.

As a child, without constant schedules, instruction and hovering parents, I played freely and vigorously. It was not until I became an expert on the science of self-motivation, did I realize the awesome power of play. Free, unstructured play is directly linked to the development of our brain’s prefrontal cortex—the brain region responsible for discriminating relevant from irrelevant information, goal direction, abstract concepts, decision making, monitoring and organizing our thoughts and feelings, delaying gratification and planning for the future.

The Value of Community and Connection

Whether a local nonprofit, or far-off “relative”, many immigrants benefit from strong community connections and their children learn that “no one does it alone.” Although it may seem paradoxical, the very skills needed for independent achievement develop within the structure of a group. It is through belonging to a community that we shape both a collective and individual identity, benefit from the exchange of ideas, develop rich social skills and form important (and often lifelong) connections with friends, mentors and role models.

Researchers Dr. Hsin and Dr. Xie, who studied the achievement of Asian American students, noted that immigration itself is a factor in immigrant kids’ success stating, “Immigration is a manifestation of that optimism through effort, that you can have a better life.” Of course, the hard work of immigrants is frequently noted, but the power of optimism and gratitude has been shortchanged. Research studies show that when we have an optimistic view of the world, believing that we can control our feelings and behaviour, we benefit with less stress, improved life satisfaction and even a longer life.

For me, the most self-motivating aspect of being a child of immigrant parents was my parents’ unwavering commitment to work hard, not just for themselves, but to also, “pay it forward.” While driving his taxi, it was not uncommon for my father to bring home new immigrants who had just landed at the airport without anywhere to go (one even stayed with us for two years). Above all other factors, it was being witness to my parent’s deep gratitude for the chance to have a better life that made me also grateful for my opportunities.

Countless studies exist on the beneficial effects of gratefulness, such as an improved sense of happiness, personal growth, better social relationships, better sleep, less depression, less stress and better coping skills. Gratitude is highly motivating and it led me to want to “do something with my life” that had both meaning and purpose. Thankfully, being grateful is not exclusive to children of immigrants – it is something anyone can practice and cultivate at any time.

Dr. Shimi Kang is an award winning, Harvard-trained doctor, researcher, media expert, and lecturer on human motivation. She is the Medical Director for Child and Youth Mental Health for Vancouver community, a Clinical Associate Professor at the University of British Columbia, and the founder of the Provincial Youth Concurrent Disorders Program at BC Children’s Hospital. She is the author of the #1 Bestseller, The Dolphin Way: A Parent’s Guide to Raising Healthy, Happy, and Motivated Kids Without Turning Into A Tiger (Penguin Books 2014) and writer whose articles appear in major media outlets including the Huffington Post, Psychology Today and Time Magazine. 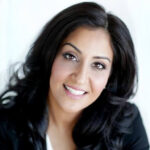 The Immigrant’s Dilemma in Arts: an Interview with Richard Young