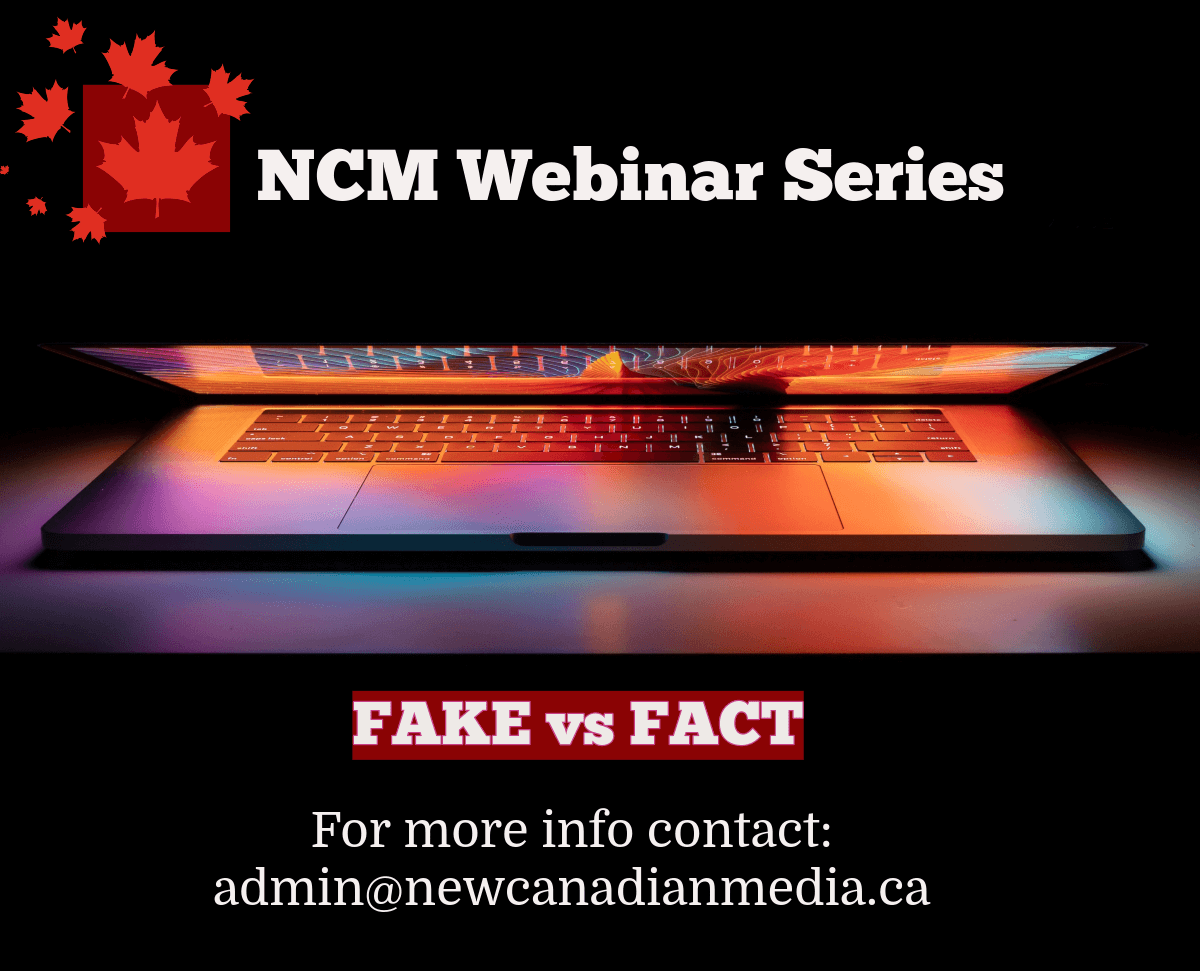 Our videos can help you:

LANGUAGE OPTIONS: Please turn on closed captioning (CC) within the video. Click on settings and auto translate to select your desired language.

Part 1: An Introduction to Fake News

Part 2: Elections in an Age of Misinformation

Leading our lineup of instructors is Louis Baudoin-Laarman, a journalist with Agence France-Presse (a news agency that is part of the Poynter-affiliated International Fact-Checking Network). He investigates fake news reported by Canadian Facebook users and previously fact-checked for The New York Times. Check out his fake news blog.

Baudoin-Laarman will present on spotting and combating disinformation in a journalistic environment.

Prof. Ahmed Al-Rawi is an Iraq-born expert on fake news who teaches at B.C.’s Simon Fraser University. He began his media career in 2002 by serving as communications officer and later a spokesperson for the International Committee of the Red Cross in Iraq. He also worked as a freelance radio correspondent for U.S.-based radio stations and briefly as an editor for CNN Arabic bureau in Dubai.

Al-Rawi will present on diaspora communities and news manipulation with a special reference to the 2019 general election in Canada by examining the issue of Twitter bots and two case studies.

Brent Jolly is the director of communications, research, and community management with the National NewsMedia Council of Canada (NNC). He is a co-author of the recently-released study ‘Good News, Bad News, a snapshot of conditions at small market newspapers in Canada’, in partnership with Ryerson University’s Local News Research Project.

Jolly serves as the national vice president with the Canadian Association of Journalists; is Canada’s press freedom liaison to the international chapter of the Society of Professional Journalists; and is a media, law, and policy fellow at the University of Oxford.

Jolly’s interactive session will provide delegates with an overview of relevant ethical codes and then put you in the ‘driver’s seat’ to test your ethical gravitas.

Eva Salinas is managing editor of the foreign policy news site, OpenCanada.org, and a sessional journalism instructor at Mohawk College in Hamilton.

Salinas will discuss the challenges specific to working in multiple languages with diaspora groups and international teams.

Jagdeesh Mann is a Jack Webster Award-winning journalist and media professional based in Vancouver. For a decade, he was the Executive Editor of the Asian Pacific Post and South Asian Post – independent weeklies serving Vancouver’s multicultural communities.

Now a freelancer, Mann writes for a number of Canadian news outlets: The Globe and Mail, Toronto Star, Georgia Straight, Vancouver Sun, and others. He is also the director of Sunflower Media, a digital media boutique that specialises in multicultural marketing, and a member of the NCM Collective.

Mann teams up for an interactive workshop that provides guidance on how to help audiences distinguish between fact, opinion, and deliberately fake news.

What is fake news, really?

Fake news is anything that aims to communicate information containing factually inaccurate elements. It should not to be confused with misleading statements, intellectual dishonesty, opinion, or subjective statements.

Often, fake news presents “facts” that cannot easily be verified, seek to advance a political agenda, and hope to scare or anger the reader. Fake news is commonly created by people who are not experts on the topic or even journalists

Is there a free online course that can help me to improve my factchecking and ability to spot disinformation online?

Yes. The International Fact-Checking Network at the Poynter Institute and the American Press Institute developed a great, free online course that can be taken alone or in a group setting. View the course here: https://www.poynter.org/shop/fact-checking/handson-factchecking/

We can also recommend UNESCO’s Handbook for Journalism and Education Training, which focuses on tackling disinformation. https://en.unesco.org/sites/default/files/journalism_fake_news_disinformation_print_friendly_0.pdf

Can fake news sometimes get part of the story right?

There can be selective information included or critical information omitted, which means the article isn’t giving a responsible, full picture of the issues at hand. This can often be done as an attempt to manipulate the reader.

Are there common, repeatable themes around fake news, particularly in Canada?

Refugees, Islam, the current federal government in power, as well as climate change, have been identified as routine targets for purveyors of fake news in Canada.

What would you recommend as helpful tools for fact checkers?

In addition to debunking sites such as Snopes, Politifact and OpenSecrets.org, helpful tools for Canadian fact checkers can be resources such as CanLii, StatsCan and the Library of Parliament.

Where does most fake news show up?

In the eyes of Canadians, over several polls on the issue, 68% of respondents found that social media platforms (particularly Facebook) were most responsible for propagating fake news articles in our country. In terms of political ads on Facebook, for example, there is so far no indication of desire within Facebook’s management structure to police, or verify, information in political ads intended to purposefully mislead audiences.

In terms of understanding or learning more about ethics in journalism, can you recommend a good resource?

The National Newsmedia Council has a very interesting database of actual complaints filed against media outlets, as well as the ultimate decision that arose from the ethics investigation. It covers areas such as bias or inaccuracies and how they are addressed when discovered. https://mediacouncil.ca/accuracy/

Can you recommend a classroom exercise for examining fake news and factchecking?

Break into groups of 2-3 people. Give your teams 3 minutes per question to discuss.

IDENTIFY CHALLENGES YOU HAVE FACED IN YOUR WORK (examples/case studies, reasons why factchecking is hard, what is your own process? Where do you get sources for stories? Trace your steps to understand how slips happen.)
BRAINSTORM STRATEGIES THAT YOU COULD USE (identify steps to take when working on a story, resources you have, peer/industry support, what kind of personal pledge could you make? Are there stories or projects you would do differently next time?
CASE STUDY: Let’s talk about the Time magazine piece on Prime Minister Justin Trudeau and the brownface scandal. How did media know the picture was real? What was their process? Please open and discuss the article: https://time.com/5680759/justin-trudeau-brownface-photo/

This project has been made possible in part by the Government of Canada through the Department of Canadian Heritage’s Digital Citizen Initiative, and offered in partnership with the National NewsMedia Council.