Colonization and immigration in Canada: Land of both opportunities and hurdles - New Canadian Media

On June 17, 2017, on the eve of National Aboriginal Peoples’ Day, former Governor General of Canada David Johnston declared on CBC Radio’s The House: “We’re a country based on immigration, going right back to our, quote, ‘Indigenous people’, unquote, who were immigrants as well, 10, 12, 14,000 years ago.”

The statement went viral at the time and was strongly criticized for its conflation of Indigenous peoples and immigrants.

However, the line between immigrants and settlers is more blurred. To understand the distinction, one must go back in history to the creation of the Canadian Confederation.

Although the first Immigration Act was not issued until two years after Confederation, it was from 1867 onwards that the movement of people to Canada could be described as immigration and no longer just as colonization, explains Steven Schwinghamer, a researcher and historian at the Canadian Museum of Immigration. He says that “the process of colonization, which is ongoing,” continues to affect the reality of Indigenous peoples and informs the country’s migration policies.

The first Immigration Act of 1869 laid the groundwork for “a preference for white British immigration that would remain in place for a long time,” says Schwinghamer, and was a continuation of the practices that were in place in New France before the British settlement. At the request of Intendant Jean Talon (1626-1694), French citizens between the ages of 16 and 40 were encouraged to move to the “New World” as long as they were in good health and had no physical limitations that prevented them from engaging in the colony’s activities.

“Even in today’s point system,” the historian argues, “there is a preference for age, occupation; a preference based on health status and, of course, wealth.”

Access to Canadian immigration is still limited for people from the Global South, and applicants from lower social classes or without degrees are only considered depending on the economic needs of the moment, Schwinghamer says. According to Statistics Canada, “more than half of recent immigrants are admitted under the economic category.”

Since the 1960s, as society has evolved, there has been progress in defining “who might be a desirable citizen,” Schwinghamer acknowledges. He points out, however, that “despite the neutral and unbiased appearance of Canada’s [migration] policies, the system in place carries structural biases that have been operating for many years.

Systemic racism, which affects Indigenous peoples as well as immigrants, is “the product of a colonial ideology,” says Raul Amin Perez Vargas, professor of sociology at the Université du Québec à Montréal (UQAM).

“There is also an interest in making a society more precarious, in re-establishing hierarchies between populations based on these forms of [socio-economic] domination, and therefore in freezing their social mobility,” he says, going so far as to say that “the marginalization of immigrants and Indigenous peoples stems from the same process.”

In Canada, which was successively a trading colony and a settlement colony, the economic question has “been the driving force behind an ideology of minorization of populations, and this since slavery,” Vargas said.

According to Schwinghamer, the non-recognition of credentials and prior learning, the use of temporary foreign workers, and the massive rejection of study permits for African nationals are all examples of an “immigration system rooted in colonization.”

What about the role of First Nations, Inuit and Métis peoples in Canada’s migration policy-making?

Under the various treaties that regulate the relationship between Indigenous peoples and the federal and provincial governments, they theoretically have a say, “but in reality, they don’t,” Schwinghamer says.

“In the past, it was unusual, if not unheard of, to have substantial consultation or participation of Indigenous communities on migration issues,” he says.

Calls to Action 93-94 of the Truth and Reconciliation Commission’s final report, released in 2015, mark a historic step in this direction. In it, the federal authorities are called upon to provide more information to newcomers about “the diversity of Canada’s Indigenous peoples, including treaties and residential school history,” as well as to amend the citizenship oath.

These calls to action were partially heeded, and also raise questions about the role that immigrants can play in the long march towards reconciliation with Indigenous peoples.

This article was originally published in French. English translation by Daphné Dossios. 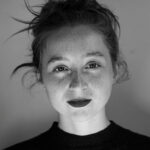 Adèle Surprenant is a freelance journalist. She has worked in North America, the Middle East, North Africa and Europe, and is interested in issues related to migration, gender, labor and social movements.