Language, as a representation of the world one lives in, is inextricably linked to identity. It allows us to both name and understand ourselves and our relationship to the world around us. 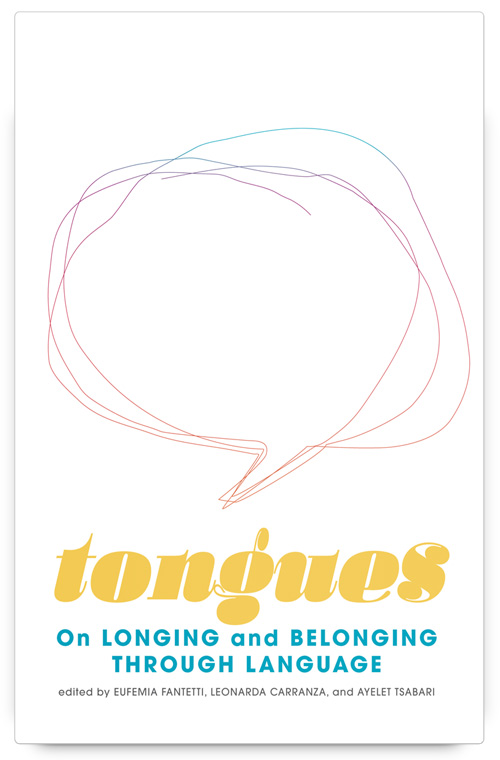 Edited by Eufemia Fantetti, Leonarda Carranza, and Ayelet Tsabari, Tongues: On Longing and Belonging Through Language includes 26 essays by Canadian writers of a dizzying diversity of origins, all struggling with their relationship to their mother language and, many times, to English, the language they came to learn as immigrant children and in which their essays are written.

A profound sense of loss pervades many of the works, as the authors reflect about their experience with moving to Canada as children or young adults and being forced by circumstances, erroneous beliefs from parents, or trauma, to learn English — to the detriment of their own mother tongues.

Carranza, born in El Salvador, says all three editors had been considering writing about language “for many years.” After her own piece focusing on language was published under the title Tongue, they decided to use it as the inspiration for the new anthology.

Carranza says her own work explores “similar themes” including “the shaming and exclusion” children experience while learning a language.

“I feel like I’m really interested in language and how it feels like belonging,” she explains. “Or in the ways that language operates and creates barriers for people.”

Many essays also touch on language and translation as political acts that reassert the search, use and love of one’s mother language against English, considered a colonizer tongue.

Such is the case in Rebecca Fisseha’s essay, “Say Something In Your Language,” where she makes the case for not italicizing words in Amharic, her mother tongue, when writing in English. The process, she argues, has the effect of writers othering themselves in writing rather than seamlessly inhabiting the world in whatever language it exists.

“It’s all the live version of non-italicizing.”

Fisseha believes that the coexistence of non-English words with their English counterparts actually enriches the text.

“Non-English languages might have English equivalents, but they’re not quite the same,” she told New Canadian Media in an interview. “When writing in a non-Western context, there’s an advantage to adding non-English words in that it really adds to that specificity.”

She continues: “So that even if the reader doesn’t know that language, even the sound of those words creates just an unfamiliar echo in their mind, which is a kind of entry into that culture. They might never know the specific meaning of the word, but it’s still something you know.”

In “The Seven Grandfathers and Translations,” Ashley Hynd writes about translation as a political act that forces humility on the English speaker by being excluded from a language that they don’t read or speak.

“Ultimately, replacing an English word with Anishinaabemowin is a political act in the sense that it allows access to parts of the story to only a select few,” Hynd explains.

The preoccupation with language transmission is the focus of many of the essays. Writers explore themselves as both transmitters of language (to their children) and holders of it (what they received from parents and grandparents).

In “How to Say Banana in Kiswahili,” Taslim Jaffer opens her essay by recounting a discussion she had with her 12-year-old daughter about the word ‘sufario,’ the term for ‘pot’ in Kiswahili.

“It’s a sufario,” Jaffer says to her daughter. “It’s a pot,” replies her daughter laughing. The anecdote reflects the conflict and fear many immigrant parents experience when faced by the language choices and inclinations of their children, whether they’re arriving in Canada or are born here. “I’m afraid their monolingualism will erase where they came from,” Jaffer declares in her essay.

Jaffer, who is currently pursuing a Master of Fine Arts in creative non-fiction while also teaching writing, feels the pressure to keep her Kutchi culture alive in her household.

“And that if I don’t successfully envelop my children in their ancestral culture, it stops there. The language will stop. And whatever traditions I don’t pass down will stop. So, yes, absolutely, I do feel that pressure.”

Jaffer mentions that other first-generation Canadian parents she speaks to echo her concern about their children not wanting to use their mother tongues as much as English or French, Canada’s primary languages. She says that their kids are just not interested in their mother tongue because they never really have to use it.

“It’s not on them, because if they are okay with only speaking English and French, then I need to let it go. I sense that loss, but they don’t know what they’re losing. But they are still young, so I will keep insisting that they use these words, and I will keep exposing them to the language as much as I can,” she says.

Tongues is essential reading for anybody interested in languages, translation, and linguistics.

But it’s also for anybody interested in the immigrant experience, the Indigenous peoples’ pain in the loss of their land and language, the political implications of language for members of the LGBTQ2+ community, and for anybody who loves non-fiction writing.

The editors hope the anthology will spark a conversation about Canadians being able to freely express themselves in any of the 200 languages that are spoken as first languages in the country.

Fantetti, one of the anthology’s editors, suggests a good place to start the discussion is on how language and something as rudimentary as “sentence writing skills” can be used to treat people “as less than” in order to deny them opportunities.

“There’s a whole bigger system at play here about literacy and ability and whether one is being asked to participate in the dominant culture,” she said during the book launch.

“And that’s a huge thing to consider…where everybody’s coming from and how we will connect with each other, because we need to be able to connect through our ability to communicate.”

The collection is an extraordinary achievement, one that succeeds in creating a colourful tapestry out of the hundreds if not thousands of languages that live within the soul of the inhabitants of this land we call Canada.