Currently, the system only allows public universities and institutions granting private degrees the eligibility for their students to qualify for Post Graduate Work Permits.

“There are not enough seats in public universities and colleges, so it would boost enrollments to record highs in private educational colleges if this system was unilaterally applied across the board,” said Patrick Dang, a 30-year veteran of Canada’s international student industry and CEO and president of Seymour Education & Learning Centres (SELC) in Vancouver.

“We need to allow public and private educational institutions the possibilities to work in conjunction to create a seamless system that is not skewed only towards public institutions being able to provide Post Graduate Work Permits.”

The group is lobbying Immigration, Refugee and Citizenship Canada (IRCC) to have the policy changed, estimating that excluding international students attending private colleges represents a loss of $120 million annually.

“Should international students attending career colleges be allowed to receive work permits, it is estimated that thousands of jobs would be created,” the association states.

The call to expand the PGWP program comes as a series of global surveys show Canada to be dominating the international student destination market.

One of them, from IDP Connect, which had 3,650 respondents from 55 countries, found that more than one-third of the students surveyed rated Canada as their top choice for post-secondary studies.

In an analysis of the study, IDP said: “Migration incentives and post-study work rights were…found to be strong drivers that could be used to influence which courses and in which countries students chose to study.”

The “main motivational driver for students was their future career opportunities, with financial considerations driving decisions of where and what to study, including the ability to work part-time while studying, tuition fees and the cost of living.”

The survey showed that Canada was currently the most popular overseas study location for students questioned, most of whom hail from Asia, with a significant portion coming from Commonwealth countries. The largest number of students came from India (1,133), the Philippines (583) and Sri Lanka (456).

Simon Emmett, CEO at IDP Connect, said that countries that offer students clear outcomes for their investment in their education and a pathway to on-campus study will benefit most from the demand for overseas study.

QS World reveals international students are once again showing increased confidence in Canada as a place to study due to the country’s successful COVID-19 vaccination program.

“Canada has a well-established position among the world’s leading study destinations,” according to the QS Quacquarelli Symonds website.

“The most popular Canadian provinces for international students are Ontario, British Columbia and Quebec.”

A third recent study by financial service provider Remitly, also showed Canada topping the rankings as the most desirable country for students around the world looking to pursue their studies.

“It’s not hard to see why Canada is so far ahead of the competition in our research, with the inhabitants of 36 countries searching to study here,” according to the survey, which is based on Google search data.

Dang of SELC said a good amount of job opportunities to help people earn while studying and after their studies are complete is a key reason for Canada’s attractiveness as a top international student destination.

Allowing international students to work off campus for 20 hours a week (40 hours for students who have completed their courses), will also go a long way to help Canada’s labor crunch, he said.

“The current labour crisis speaks to at least 1.5 million unfulfilled jobs in B.C. alone over the next five years,” he said.

The following graph shows the top five highest paying part-time jobs for students in Canada, according to an IDP study. 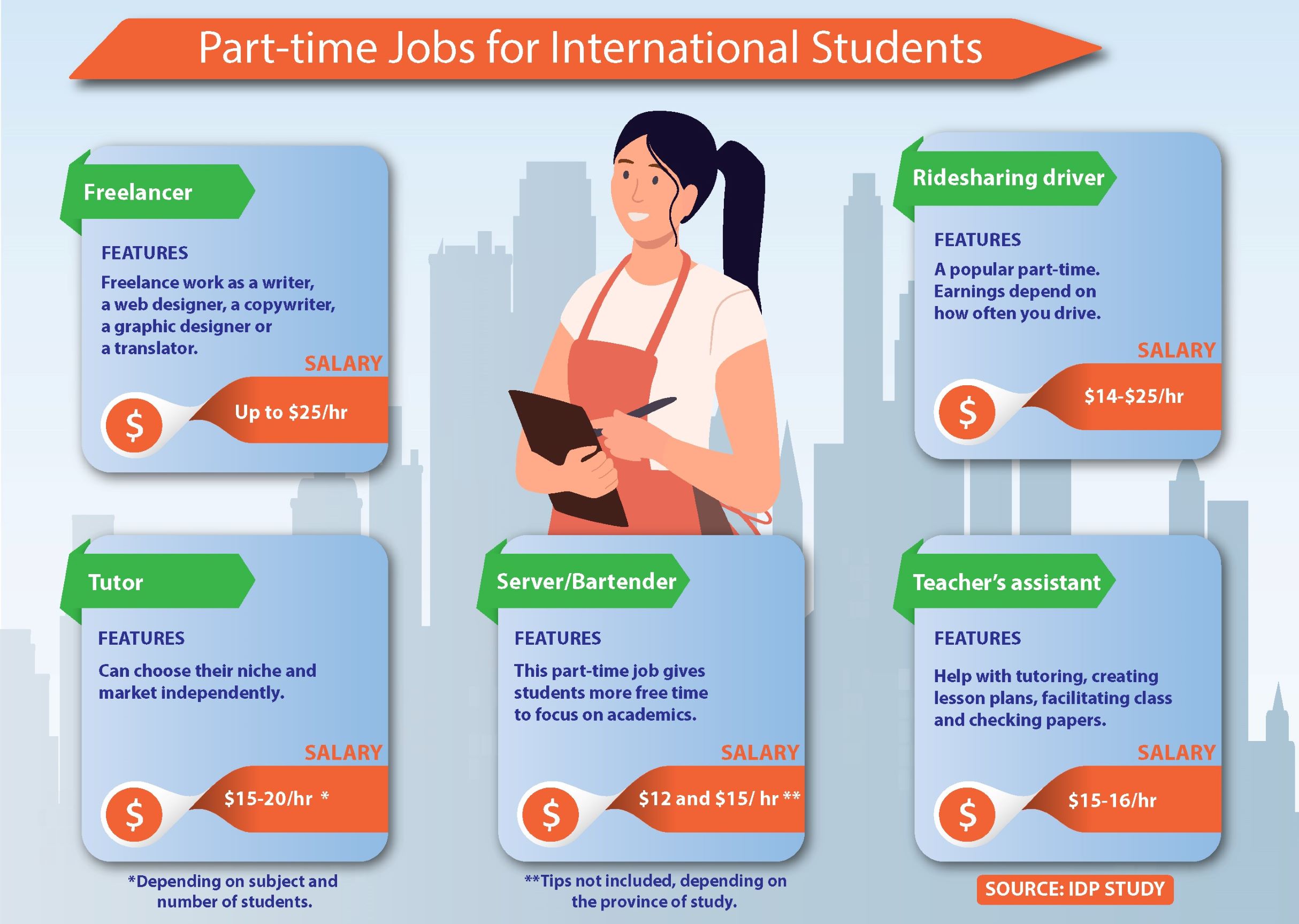 A multiple-award winning journalist, Fabian Dawson is an internationally acclaimed author, filmmaker and media expert. His work over the last four decades spans the globe and he also serves as a consultant/strategic advisor to a variety of international companies. As deputy editor-in-chief of The Province, part of the Postmedia chain, Dawson led initiatives within a special publications group to provide directed content for a variety of organisations. He was named the 2019 recipient of the Bruce Hutchison Lifetime Achievement Award at Jack Webster Awards. Dawson has been invited by the governments of India, Malaysia, Taiwan, China, Hong Kong and the United States to act as a media observer/advisor on a variety of Asian-Canada issues. Dawson, now operates FD Media, which specializes in harnessing editorial assets to revenue generating opportunities.