Last week I came across an article in the Halifax Chronicle Herald memorializing a tragic day fifty years ago when three young boys were randomly gunned down by a man who was found to be mentally disturbed. My own memories of that time came flooding back, along with the realization that I had narrowly missed being a victim myself.

I was 13 that summer in 1964, the son of the first Chinese boy to live in Halifax. My dad had been there since 1916 and had grown up to be an important fixture in the community, eager to help anyone and everyone.

My younger brothers and I were accompanying our mother (who didn’t speak any English) on a cruise ship that would take us from Halifax to New York City in two days to visit our sister. Among other things, Dad would often book travel arrangements for many in the Halifax Chinese community because he spoke perfect English so he knew how to convey the details to the travel agent (who all too happily paid him a small fee for each ticket he sold).

Among other things, Dad would often book travel arrangements for many in the Halifax Chinese community …

As the oldest son in the family, I was in charge of our group, talking to the baggage handlers, the waiters and other staff on board. Dad dropped us off mid-afternoon hours before departure so he could head off and run a few errands before heading home to a quiet house. We were shown to our cabin and settled in when it suddenly hit me that I had forgotten my stash of vacation comic books back at home! With so much time left to wait for departure, I ran down the gangplank and off the ship, heading up South Street just a couple of blocks back to our house. Dad wasn’t home yet so I let myself back in and retrieved my comics and left him a note. Comics in hand, I dashed back to the ship and into our cabin with hours to spare!

The ship finally set sail into the Atlantic on to New York City. And not being accustomed to any kind of motion, Mom immediately got seasick and spent her entire time in our cabin throwing up. So my brothers and I would have the run of the ship. What a blast! It was one opportunity to enjoy some rare moments of freedom and independence. We’d eat our meals in the dining room enjoying being waited on by the staff and we’d take a little food back to Mom in the cabin, even though she couldn’t really eat much the whole time we were on the ship. We’d spend our days exploring the entire ship level by level and stopping here and there to look around with no adult supervision!

Two days later, we pulled into New York Harbor, passing the Statue of Liberty to pull into our dock. After disembarking, we cleared immigration and customs with our paperwork and were greeted by our sister and her family. We drove over to their house in Brooklyn and settled in to get our sea legs back.

Dutifully, I went over to the phone to call Dad as we had always been taught to do when I arrived anywhere – I placed a collect call for him to our number at home. He would typically decline the collect call, “I’m sorry. He’s not here right now. Could I take a message?” was always his response and the operator would do her job with no charge on either end. It was another one of his ways of being frugal and not wasting money, carried over from his days of living through the Great Depression. (How many of you remember this trick too? I always wondered how many operators would shake their heads each time a collect call came in.)

But I couldn’t believe what happened next! This time, he actually said, “Yes, this is him. I will accept the call!” I fell back into my chair! “I need to talk to you about something,” he said.

He proceeded to tell me about the shooting spree that had just taken place in the South End of town, close to where we lived. Apparently someone had shot three children while riding his bike. It had happened around the time I had dashed home and back to the ship to grab my comic books!

“You could have been killed!” said my father.

That fact didn’t hit home until I read that Herald piece and saw the map showing the killer’s route through the South End. I could see that he had ridden along close to the railway line near the harbour. I would have been crossing through the same area right around the same time on my way back to our house.

I spent a lot of that summer vacation thinking about that horrific event and the death of the two young boys (the third survived). But, in our house, we never talked about it again.

Robert Lee is an entrepreneur/artist whose diverse background encompasses computer programming and hardware design, marketing consulting, advertising and electronic payment systems. He runs a blog called Being Chinese alongside his brother, which explores the history of growing up Chinese in the West. 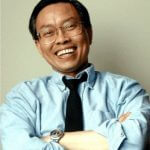