New immigration minister inherits backlogs, migrant worker issues - New Canadian Media
Backlogged immigration applications have only worsened during the pandemic. (alexskopje/Canva)
The new Immigration Minister Sean Fraser will have to act quickly to deal with thousands of backlogged immigration applications that worsened during the pandemic and the many issues affecting migrant workers. All this as Canada tries to welcome 1 million immigrants by 2023 to keep the economy going. NCM's Alec Regino reports.

In a post-election shakeup that has seen Prime Minister Justin Trudeau overhaul his Cabinet with an assortment of new faces in key places, Nova Scotia MP Sean Fraser will now be leading the immigration portfolio.

Of the nine newly-minted members of Trudeau’s front bench, Fraser is slated to take the Citizenship, Refugees and Citizenship Canada department from outgoing minister Marco Mendicino, who served for a little under two years.

Mendicino will now be responsible for the Department of Public Safety. Under him, the government promised to welcome an unprecedented 400,000 immigrants to Canada per year from 2021 to 2023 to support long-term economic growth.

Fraser, whose name has been floated for cabinet positions in previous years, was first elected as the Member of Parliament for Central Nova in 2015. Prior to his appointment as minister, Fraser served as associate minister of finance and held a number of parliamentary secretary roles.

“I am humbled to have been appointed by (Prime Minister) Justin Trudeau to serve as the Minister of Immigration, Refugees, and Citizenship,” Fraser tweeted on Tuesday. “Immigration will remain a key pillar of Canada’s recover and I’m committed to ensuring that we continue to have the workers we need, where we need them.”

Fraser will be tasked with overseeing an IRCC that faces a number of key challenges exacerbated by the pandemic, namely the backlog of unprocessed immigration applications and pressing labour shortages across many sectors all over Canada.

Canada’s immigration system came to a standstill following the onset of COVID-19 in March 2020. While the IRCC has made efforts to continue processing applications online, many immigrants have been left in the dark, with many feeling frustrated due to a lack of communication, minimal updates, and long waiting times.

On Twitter, many individuals responded to the appointment of Minister Fraser by expressing hope that the cabinet shuffle will expedite longstanding immigration backlogs. 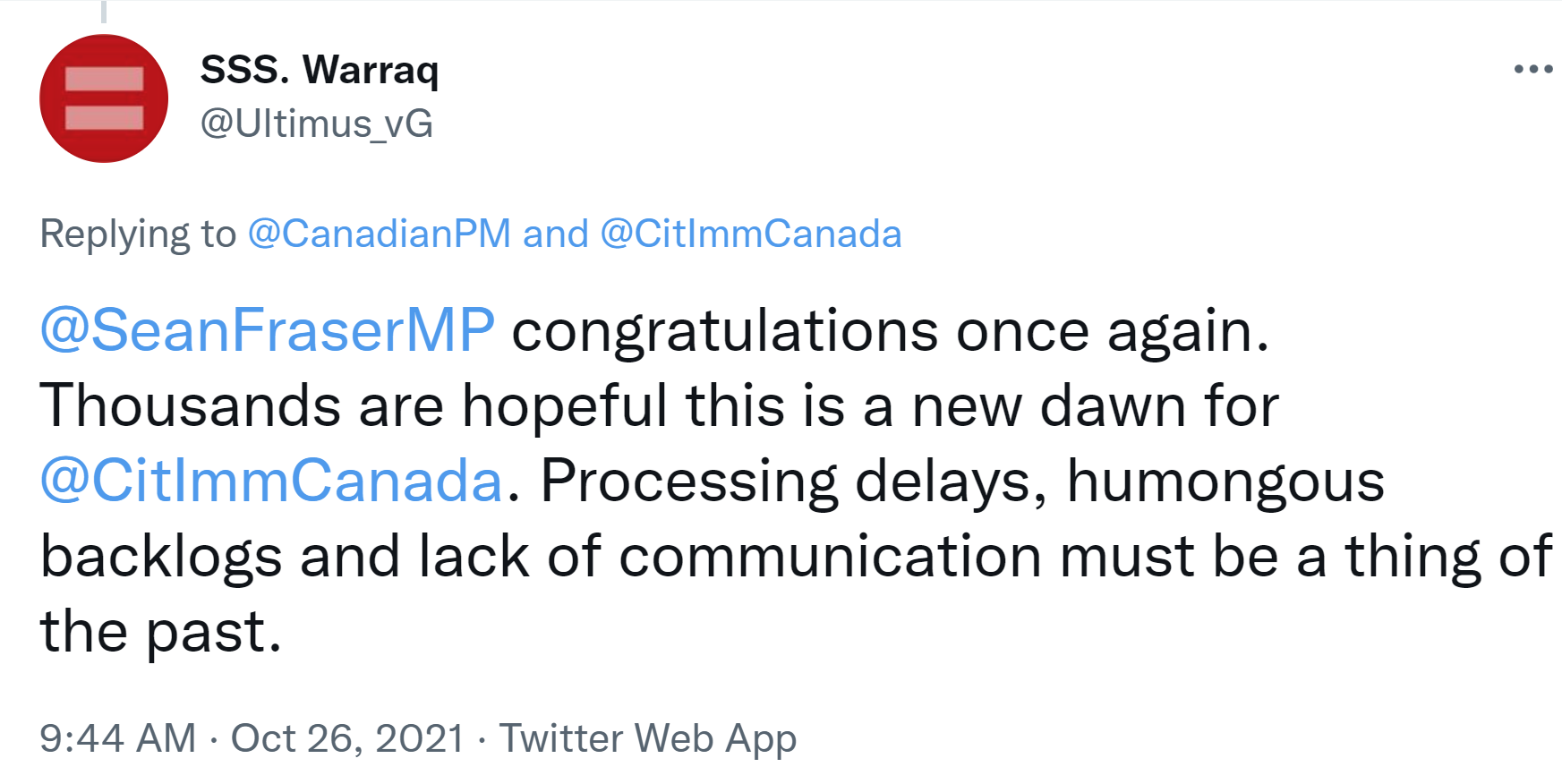 As of July 31, more than 748,000 people had a pending temporary residence application as students, workers, or visitors, close to 562,000 were waiting for permanent residence, and the backlog for citizenship was around 376,000, the Toronto Star reported.

A fresh face in the cabinet is also an opportunity for the Liberal government to address pre-existing labour issues for migrant workers.

The Migrant Workers Centre (MWC), a non-profit dedicated to advancing fair immigration policy and labour standards for migrant workers, penned a letter to Trudeau on Oct. 22 calling for a number of initiatives that would increase immigration to aid with economic recovery. These include calls to increase caps on the number of applications processed, phase out employer-specific work permits, and introduce increased protections for exploited workers.

“Increasing pathways to permanent residency is a crucial step in recognizing the important contribution of essential migrant workers and ensuring they are not subject to undue hardship or exploitative working conditions,” the letter states.

Increasing permanent residency pathways are also “a simple way to increase Canada’s immigration numbers with those who have already been working in Canada and contributing to our country’s communities and economy.”

According to a survey conducted by Environics Institute in Sept. 2021, eight in 10 Canadians agree that immigration has a positive impact on the economy of Canada.

“It makes sense that we recognize the important contributions of migrant workers throughout this pandemic,” MWC staff lawyer Amanda Aziz says. “Canada’s economy has been supported by migrant labour. We’re hopeful that that recognition will continue and lead to some more significant changes in terms of better and fair immigration policy.”

This article was written as part of the ‘NCM – Village Media Advanced Training and Mentorship for Immigrant Journalists’ special project.

Alec Regino is a Reporting Fellow for the Pulitzer Center and a freelance journalist based in Vancouver, BC. He got his MA in Sociology at McGill University.

MULTICULTURALISM @50: Everybody benefits from overcoming discrimination

MULTICULTURALISM @50: “Inclusion is the opposite of assimilation”

Immigration takes a back seat at Three Amigos summit

Immigration system under the lens in precedent-setting racial profiling case