Just over a year ago (April, 25, 2015), a devastating earthquake hit Nepal, bringing this country to its knees. Word spread immediately around the globe and several countries and charitable organizations began to fund-raise, donate relief materials, deploy search-and-rescue teams and send medical personnel to assist this country, best known as home to Mount Everest.

As an expat living in Kathmandu who was here during the earthquake, and watching this small country rebuild itself over the last 12 months, I’ve been asking myself, “What’s actually happened?”

Billions of dollars were donated and put into the hands of organizations in the hope of making a difference. So, why a year later, are people still living in displacement camps and tents? To provide some perspective, the average person in Nepal lives on less than US$1 dollar a day, which means for US$10, I can comfortably feed myself for a week and have extra to splurge at the movies. So, if billions of dollars were donated for relief, why are people still struggling to get food and living under tarps? The monsoon season is almost here, meaning three to four months of pouring rain and little relief work.

The Nepali Prime Minister directed that funds sent from outside Nepal for relief must be re-routed to the Prime Minister’s Relief Fund, as this would ensure proper distribution of aid, especially to the neglected and most affected communities. Although the government has vowed to fight corruption related to earthquake relief, reports indicate that funds are being used for political considerations. And given the country’s history, it’s difficult to assume corruption hasn’t played a role.

Over the past year, I’ve spoken to several foreign volunteers who came to Nepal at their own expense to bring relief themselves. The issue I’ve heard most often is that government and relief organizations are not working together. In addition, one volunteer from Canada working with All Hands in Sindhupalchowk, one of the worst affected districts, expressed his frustration about how this disaster is not being utilized as an opportunity to develop and educate the people.

He asked to remain anonymous but said, “We [foreigners] come in here and do everything, but teach nothing. I’ve been building this guy’s house for the last two months and he’s just standing there watching me. We should be teaching the people and educating them instead of simply doing the work. I don’t mind helping — that’s what I came here to do — but we should utilize this opportunity and invite the locals to join us.”

“We [foreigners] come in here and do everything, but teach nothing. I’ve been building this guy’s house for the last two months and he’s just standing there watching me. We should be teaching the people and educating them instead of simply doing the work. I don’t mind helping — that’s what I came here to do — but we should utilize this opportunity and invite the locals to join us.”

In Nepal, it’s a status symbol to have a ‘tall’ house, and it’s common for homes to be four storeys or higher. I spoke to Rabina Gurung, a local registered nurse living in Kathmandu, who said she believes the earthquake itself was an opportunity for education: “Before earthquake, people used to make and design their own house. But now they want a plan and to hire the right people. I think now people see a tall house is a bad idea and they need a good foundation by professionals.”

Bimal Osti, a father and manager of the Moonlight Children’s Home (MCH) — an organization that provides housing to abandoned girls in Nepal — agreed and shared, “After the earthquake, people started to see the benefits of a small house. Smaller is better, and now they see that. People are proud of their small houses.”

But what about the Nepal government? As the months pass, relief organizations continue to work and assist those in temporary housing, while the government attempts to centralize authority over relief funds.

So where does that leave Nepal?

“Nepal has no problem”

Over the last year I’ve become very close to the culture and the people. After learning more about Nepal’s history and living the ongoing struggle of earthquakes and aftershocks, fuel shortages, and daily scheduled power outages which can last for more than 12 hours, I believe the country and its people are slowly developing.

As Adhikari put it, “The problem with Nepal is Nepal has no problem.”

The culture and of in Nepal are very relaxed, calm and unruffled. While this is something that makes Nepal special, it doesn’t necessarily allow society to progress and develop.

As Akash Sarki, a local business owner, mentioned, “We just try to minimize our costs and stay with what we have; never reaching for anything more and never having a problem about anything.”

While the shift has been gradual (post-quake), I believe things are beginning to change for this small, landlocked country since the signing of a New Constitution last fall, after many years of debate.

Bikash Gyawali, a local IT entrepreneur, believes a lot of change has come because of the Internet.

“The Internet world is beginning to make its mark in Nepal. It’s giving people access they never had before. Seeing what’s on the outside is reason itself to want to grow and develop.”

While I agree with Adhikari that we all need to take responsibility for ourselves, I also believe the local government needs to implement an education campaign so people can adopt new daily practices, especially in the villages where electricity and the Internet are not always available. The Nepali government could help its people faster if aid can be transparently administered, working hand-in-hand with NGOs and other relief organizations.

Canadian-born Laska currently lives in Kathmandu, Nepal, writing, life-coaching, and pursuing her passion for mountaineering. She arrived in Nepal in April 2015, days before the quake. Over the last year, Laska has volunteered her time in schools, offering counsel and motivational workshops to assist students dealing with post-traumatic stress caused by the earthquake. 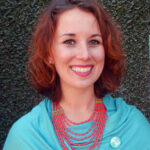 An experienced mentor to women in business and the youth, Laska has an unshakeable passion for writing. Inspired by helping people realize their human potential, when not coaching a client or sitting at her computer creating engaging content, you will find her outside seeking adventure.