Going back to school after a decade: A mom’s narrative - New Canadian Media

How am I going to make it work?

Women have many jobs between our 20s and 30s; to complete school and start a promising career, to marry, have children, and raise them. Doctors say, 20s to 30s is the perfect time for having children. At the same time, employers want young, experienced, and smart employees for their company while families exert pressure on new couples to have children immediately after their marriage. How can we be young, energetic, experienced, and an expecting mom at the same time?  A few months or a year of maternity is not enough. It takes a decade to raise a child. And it also takes more than a decade to build a career. So, it has been tough to choose between self and family, children and ambition. What should we prioritize?

In Nepal, most girls do not even reach twenty when they get married. The deliberations on marriage start even before that. I heard about my marriage when I was in the 9th grade. Families and relatives used to bring proposals in series like the episodes of an Indian matchmaking TV show. Things were worse in my grandma’s and mom’s time. My mom got married when she was 13. Some of her friends got married at the age of seven. Such young marriages could bring a good omen to the parents, it was assumed. Its outcome was that school age girls got married. I was luckier than others as  I did not have to marry before completing high school.

I was studying the first year of my undergraduate degree, when I got married. I accepted the proposal believing that it must be done sooner than later. I did not consider the prospects the marriage could bring, nor did I seriously analyze skills, competencies, and future possibilities my then would-be husband could bring. I entered marriage as if I had to get it done like any other job.  I was so overburdened with the marriage talks that I wanted to get rid of them as soon as possible. With that said, I am not regretting what happened, just sharing the context of my marriage.

Fortunately, my marriage did not pause my studies at that moment. I could study as much as I needed even after marriage. We decided not to have a baby until I finished my master’s degree. But after two to three years of marriage, our families  and relatives started to talk about us having children. They wanted us to become parents. Their patience was over, and we had to have a baby.

We were not bold enough to fight the social pressure. In most cases, it’s easier to accept things as they are.  I became pregnant in the second year of my master’s degree. I suffered from pregnancy related health issues. Despite many absences in the class, I prepared for the final exam. I became a mom during my thesis writing. I struggled even to complete my thesis. Thank God! I was able to submit it on time. Then, the ‘pause’ occurred in my academic career.  After completing my master’s, I wanted to continue my education. My plan was to do an MPhil program followed by a PhD.  But my husband wanted me to have a job. I got the job as he wished. While I was doing a job and raising my first baby daughter, I did not anticipate having another baby. My husband wished for more. Another baby was born as wished. He was happy because his wish was fulfilled. I was happy too just because I did not have to be pregnant anymore.

Things did not end there. We were becoming more demanding of our life. We wanted a better life in a better place. So we quit our jobs and immigrated to Canada. We were eligible; visas were granted. We moved to Canada with the expectation of having a more prosperous life but it took us a few years to adjust to a new culture in a new land. The cocktail of fear, anxiety, and struggle made each of us a different person.

Still, I had a wish to continue my studies.  My dreams did not let me sleep well. I talked with my dreams. They pushed me toward the horizon where I wanted to be. I had yet to go to grad school. Back home, I was able to finish my master’s degree while handling a job and raising babies. In Canada, I had to face the challenges which immigrants normally face. Our children were still young, and we had a lot to do in life. Going to university was still one important task pending for me.

The university applications included a language test as a mandatory component for immigrant students. I prepared for the test and obtained the required scores in my second attempt. Then I searched for the programs that would suit my interest. I applied for grad school after more than a decade.  My academic ‘coma’ became a problem. My CV was almost blank; I had not presented at conferences, nor had I published anything that would make me competitive.  The same thing happened with my degree transcript. Securing the first division in my master’s was quite rare in my program, but that degree did not get recognised in most Canadian universities. The application did not turn out successful in the first attempt.

In the following year, with some insightful feedback, I made my applications stronger. I began to make writing a habit. I started writing a journal every day on different topics.  I applied for 10 programs. The hardest part was finding professors to write reference letters in support of my applications. As there was a decade of interval from my last school, I even had forgotten the names of the courses and instructors. How can I make connections with my professors and make them believe that I am passionate to study? This question haunted me numerous times. Writing a statement of purpose was the most significant part of the application. Finding supervisors was another hurdle. Making alignments with the prospective supervisors, convincing them that I could do research under their supervision was also challenging. Despite all these hurdles, I was ready to go back to school.  I kept on believing in myself and believing that I would be admitted one day and fulfil my wish.

Some people believe that we don’t need to go to university or college to learn. But I believe in academia where I can explore the world and find the purpose of being a true human being and an accountable citizen in the countries where I have shared their resources. At grad school, I can be surrounded by leading thinkers in the field of my interest, and I want to make a difference in my family and community.

I was optimistic, positive, and enthusiastic to get an admission. I believed that 2021 would be an awesome year for me and my loved ones. I was also prepared for the estimated ups and downs when studying. My number one goal and resolution for 2021 was going to a grad school of my choice. I wanted to prove to myself and other women that a mom and a wife can accomplish everything she wants in her life. Nothing can stop her from moving on.

I got admitted into three programs and chose the best amongst them.

I am not teaching anybody by telling my personal story, nor am I boasting. I believe that moms can not only survive but also thrive doing what they wish for.  An immigrant mom does not need to end her career simply because she left her country and became a mom. It’s clear that she must face the challenges. I too faced them.  Challenges are everywhere and in everything! Remember, if you wish to go to school or continue for a  school or college degree it is a challenging and rewarding adventure! 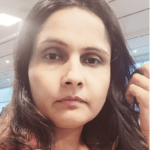 Sheela Sharma is a graduate student at McMaster University, interested in critiquing mainstream feminism and advocating economic freedom for women, justice movements, and gender parities. Her studies also focus on Indigenous and non-Indigenous women’s health and hygiene, and meaningful participation in politics and decision-making. Sheela uses ethnographic and archival research methods to examine her research questions.