The 100th anniversary of the adoption of the Poppy as a symbol of Remembrance in Canada is particularly poignant: every schoolchild learns it was Canadian Lieutenant-Colonel John McCrae of the Canadian Expeditionary Force (CEF) who penned the poem ‘In Flanders Fields’ during World War I. It was his poem, with its message of respect for the fallen, that would go on to indelibly link the Poppy with enduring acts of Remembrance across the world.

However, the revelation of “pervasive racism” within the UK’s commemoration celebrations that have failed to equally recognize Black and Asian soldiers who fought for the British Empire, should give us pause. Here in Canada, we should ask ourselves whether there is sufficient equity for minorities in the stories told through the Poppy’s lore.

To that end, a simple search of the Commonwealth War Grave’s database reveals British Indian Army troops are buried or commemorated alongside Canadians as brothers-in-arms in 115 cemeteries across France and Belgium. Digging deeper reveals that some of the casualties fell during the battles in Flanders.

Paving the way to Vimy Ridge

Examining the official records of the Expeditionary Forces of India and Canada shows that troops from Punjab’s Lahore Division (British Indian Army) reinforced the British Expeditionary Force at Ypres in October 1914. Then, they were again deployed to Ypres when Germany resorted to chemical weapons to devastate the Canadian defensive line six months later.

It was at this moment, standing stoically alongside Canadians amidst the carnage wrought by poison gases, that Punjabis helped secure a pivotal chapter in this country’s nation-building saga, for victory in this battle paved the way to Vimy Ridge.

Speaking after the war, the Supreme Commander of the Allied Forces, Ferdinand Foch, identified Indian troops as having delivered the war effort’s first decisive steps to victory. Without them, history may have indeed unfolded as Alfred von Schlieffen had strategized in his master plan, which saw the taking of Paris in 42 days and the war ending by Christmas 1914, as many speculated at the time.

History also tells us the CEF would only arrive on the Western Front in March 1915. Was it not for these men, the framing of WWI — by Canadian curriculum, citizenship guides and commemorative events — as a rite of passage and display of courage, sacrifice and nationhood may never have come to be.

Yet,  for most Canadians, the Western Front and Remembrance remain the hallowed ground of white soldiers.

School texts and museums do little to situate Punjabi infantry in Flanders in 1915 during Canada’s ‘Baptism by Fire,’ or to recognize that they were called specifically to reinforce the Canadian line.

What’s remarkable is that the Punjabis accepted even after their Punjabi kin aboard the Komagata Maru had been ejected at gunpoint by Canadian authorities from Vancouver’s English Bay (at the orders of the Duke of Connaught’s BC regiment) just days before the declaration of war.

Even more remarkable was that the Punjabis upheld their oath to King George V, and stood shoulder to shoulder with their fellow British subjects, even as other allies fled the gas.

The British Indian Army didn’t just make a difference on the Western Front at the beginning of the war. Indian Cavalry served with distinction in France and Belgium until 1918.

A story from the ranks of the Canadian Cavalry Brigade (CCB) gives testimony to the standing of Indian soldiers amongst their brothers-in-arms in Europe.

In 1916, the attachment of the CCB to the 2nd Indian Cavalry Division prompted the then-Minister of Overseas Military Forces of Canada, George H. Perley, to request the Canadians to be placed in a “purely British” Cavalry Division. His statement stressed that the mixing of Canadian Cavalry troops with Indian troops “would not be acceptable to Canada and that it would meet with strong opposition from the people of the Dominion.”

The response from the Canadian forces on the ground, who regretted such a request had been made on their behalf, resolutely reaffirmed the cordial relations between the troops and that any such transfer would prove unpopular amongst the Brigade. They even stressed that they would be proud to serve alongside the Indians until the end of the war. British command would support the CCB in this pronouncement, allowing the Canadian troopers to remain a part of the Indian Cavalry Division.

In Canada, these stories should serve as part of our Remembrance Day celebrations to highlight how successful diverse communities were in coming together under a common cause.

It’s easy to see how these tales could prompt dialogue around shared values of courage, integrity, duty, friendship, selfless sacrifice and patriotism.

Moreover, military stories are powerful because they speak to us subconsciously through innate archetypes that stand as proxies for good. Soldiers allied in our cause can be cast as heroes irrespective of race, and by virtue of their courageous deeds, inspiring greatness and betterment amongst broader demographics than prevailing Eurocentric war histories allow. Few stories are more inspiring than those of young soldiers who go to faraway lands to ‘fight for their country and national honour’ and who don’t hesitate to lay down their lives in the line of duty.

For the Sikhs, this devotion to confront tyranny is enshrined in the tenets of their faith and saint soldier code of conduct: to be fearsome in battle in defending the oppressed and gracious and humane in victory over your enemy is the Sikh way of war.

During the 2nd Battle of Ypres, the Duke of Connaught’s 47th Sikhs lost 350 of 445 men that charged a German entrenchment in the Canadian sector. Lieutenant-General Sir James Willcocks, Commander of The Indian Corps, would later laud their sacrifice: “Few battalions in His Majesty’s Army can show a higher percentage of losses throughout its service in France than this fine corps, which so worthily upheld the traditions of the Khalsa.”

By the end of the conflict, Indian troops had won over 10,000 gallantry medals across the various theatres of war.

By broadening our pantheon of military heroes, Remembrance and its symbols can be used to confront divisive voices and breathe life into hackneyed ‘unity in diversity’ slogans. Whitewashed narrations of WW1 and WW2 have been especially egregious to the Punjabi community who have had their proud heritage as brothers-in-arms diminished by decades of bigotry.

On arrival in Canada at the turn of the 20th century, Punjabis from India shared a monarchy, flag and common British nationality with Canadians (Canadian nationality was not enacted until 1947 and the Maple Leaf flag was introduced in 1965).

The ties of common citizenship that bound Punjabis to stand alongside Canada then, in Flanders, as fellow British Subjects, are also the ties that can now unite us in inclusive Remembrance of a shared heritage that changed the course of Canadian history — but only if we tell the true story of Flanders, the poem and the Poppy. 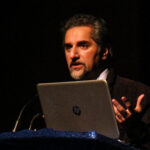 Steven Purewal is the Managing Director of Indus Media Foundation, which seeks to foster an appreciation for Punjabi heritage in Canada. Steven curated an exhibit and authored a book to define South Asian contributions to the Great War: Duty, Honour & Izzat. His work has been featured in The National War Museum, BC legislature, Government House, provincial museums, and the Prime Minister's Komagata Maru Apology. Steven lives in Surrey with his wife and three children.

‘All We Can Do Is Pray’: Indian Diaspora Shaken by COVID-19 Crisis Back Home