Immigration Law Handbook Presents Worthy Tool, but at Times Misses Mark - New Canadian Media
While the material is complex, and the intricacies appear almost infinite, the authors have made every attempt to write the new handbook in as accessible language as possible. Credit: [George Garrigues/Wikimedia Commons]

As one who looks at immigration from a data and policy perspective, reading Canadian Immigration and Refugee Law: A Practitioner’s Handbook, deepened my understanding of legal perspectives and experience in supporting clients through the various immigration and refugee processes.

Practitioners Chantal Desloges and Cathryn Sawicki have compiled a comprehensive and practical handbook that I found particularly useful in deepening my understanding of the intricacies of immigration policies. The Handbook is impressive, close to 700 pages, broken into 16 chapters, with an extensive glossary, table of cases, and index. Each chapter starts with a helpful introduction explaining the relevant policies and programs. The table of contents is helpfully designed to allow readers to go directly to the topic of interest.

The book features helpful graphics: organization charts, flow charts, and summary tables. The tables are particularly helpful and cover a range of areas: the roles and responsibilities of different actors, contrasting different programs (e.g., between the Temporary Foreign Worker Program and the International Mobility Program), occupational codes, the nature and steps in the processes, and the key provisions of the relevant legislation along with the relevant articles.

While the material is complex, and the intricacies appear almost infinite, the authors have made every attempt to write in as accessible language as possible. Yet this more accessible language does not “dumb down” the complexity of the content, but rather makes the material easier to follow and, I expect, to explain to clients. This was further aided by selected media stories that highlight the practical impacts of the issues and decisions discussed (e.g., an article on what immigration officers look for with respect to applications for spousal sponsorship).

“I kept on asking myself who might be the potential audience for such a comprehensive treatment beyond the obvious ones of current and future immigration lawyers and reputable immigration consultants?”

The Handbook also includes some statistics (e.g., different waves of refugees) although in my view, too sparingly, as some sections such as permanent residency, would benefit from a data breakdown of the various programs to provide greater context.

The Handbook focuses on practical advice for counsel in representing clients. This is particularly extensive with respect to family class immigration, immigration appeals, the refugee determination process and judicial review, likely reflecting where most immigration law practice takes place.

The recurring advice applying to all sections is that the responsibility lies with the applicant in making any application or request for consideration, the need for honesty and disclosure by the applicant  (and counsel’s professional responsibility to cease representation if the applicant is not being truthful) and that file prepared should be complete and well-organized to facilitate decision maker review. Implicitly, this essentially is a recommendation to use counsel in these areas of more complex immigration law. 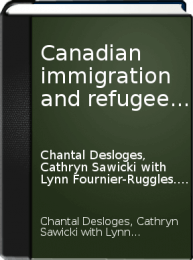 I do have, however, a few quibbles with some of the material:

One nice touch, the Handbook uses she and her as much as he and him in referring to persons rather than just one gender.

As I was reading the Handbook, I kept on asking myself who might be the potential audience for such a comprehensive treatment beyond the obvious ones of current and future immigration lawyers and reputable immigration consultants? It is clearly a specialized publication, not designed for the general public, even if written in an accessible manner.

Policy practitioners generally rely on consultation with government lawyers to ensure their policy proposals are in conformity with law. However, reading the Handbook, I found that I benefited from both the general and more specific treatment of the issues, and have already returned to the Handbook to answer some media enquiries.

Certainly, policy practitioners new to immigration would benefit from reading the specific chapter relevant to their work. While it may be too much to expect (hope?) that political staffers and political commentators would read relevant sections to the issues of the day, they would clearly benefit from doing so, as some ill-informed debates regarding Canada’s international and domestic obligations regarding asylum seekers illustrate. Other potential audiences would include academics and think tank experts specialized in immigration.

Overall, the Handbook lives up to its billing as a practitioners handbook — one relevant to anyone with a specialized professional interest in immigration issues.

The preceding review originally appeared in Andrew Griffith’s blog, Multicultural Meanderings. Andrew is the former Director-General of Citizenship and Immigration Canada, Citizenship and Multiculturalism branch. He is a fellow of the Canadian Institute for Global Affairs and the Environics Institute, and a member of New Canadian Media.

The preceding analysis originally appeared in Andrew Griffith’s blog, Multicultural Meanderings. Griffith is the former Director-General of Citizenship and Immigration Canada, Citizenship and Multiculturalism branch. He is a fellow of the Canadian Institute for Global Affairs, the Environics Institute, and a member of New Canadian Media. Visit his site https://diversityvotes.ca/

Congrats, Brent. We are confident you will do your best to hear from more Canadian voices. #diversity

It's an incredible honour to be selected by my esteemed group of peers to serve as the next @CAJ president. Whether you're a grizzled vet, mid-career freelancer, or an up-and-coming student j, it's time to rally around each other. The CAJ is your home. #cdnmedia https://twitter.com/caj/status/1280185740211650560

Columnist Peter Uduehi writes that Canadians don’t like to talk about race and racial divisions. What impact does this have on public policy making?
https://newcanadianmedia.ca/colour-blind-approaches-to-data-collection-amplifies-marginalization-of-bipoc-canadians/

After three farmworkers die in Ontario and hundreds are infected of COVID-19, authorities are finally reacting. Migrant workers’ advocates, health specialists & academics are calling on the federal government for change and protection of these workers.
https://newcanadianmedia.ca/covid-19-hitting-canadian-farms-there-had-to-be-one-dead-for-the-authorities-to-react/