Thursday, February 25, was a bad day for me. Of course, it had nothing to do with the abduction of over 300 female students from their Nigerian school in Jangebe, Zamfara State. By now, the only reason Nigerians exist is to know where the next scandal unfolds and how to measure it on the Richter scale of humiliating national indignities. It becomes shameful that Canada somehow finds a way to rub it in making it look like it understands the true meaning of scandals.

On that day, one could feel the pain of the Canadian newscaster as she reeled out the latest Canadian scandal, that pushed the Jangebe abductions to the back of the bulletin.

Canadian journalists need military-grade tactical flashlights to uncover Canadian scandals. When they find it, they use a thesaurus to find appropriate adjectives to make it convincing to their public that this indeed is a shameful one. Newscasters need appropriate voice deflections to convince you this is a sad moment in a nation’s history of scandals.

The scandal of the day was that Canada’s new chief of defence staff, Admiral Art McDonald, was stepping down for yet-to-be-specified allegations. He was less than two months in office. The tieback to the story is how Admiral McDonald replaced his predecessor, General Jonathan Vance, who also retired over allegations of inappropriate relationship with a subordinate.

As a Nigerian, these scandals make one choke on one’s mid-day coffee. Who cares what a soldier does with his subordinate in our clime? Who resigns because their hands were caught in the cookie jar in our community? Were we not shamed for calling out IG Kpotun Idris who openly romanced a younger officer to the point of impregnating her? Is that even a scandal warranting an explanation to the Minister of Interior?

Even Linda Ikeji, the grandmother of the salacious and the steamy wouldn’t be getting hits if she serialized the story. Mainstream news media wouldn’t carry the story as a back of the book. We were hardly scandalized to hear that a police officer was recently dismissed for getting pregnant in uniform without informing her superiors that she was married. Orderly room trials are not reserved for instilling moral standards on senior officers; they are reserved for the unlucky cop caught with bribe money. Even that hardly happens these days except it is caught on camera.

Here is one good reason why abnormal people like us should never be permitted to live in normal societies. Readers are already losing interest in today’s column if it talks about the morality of public officials. Why, even pastors and imams are caught pants down.

We may drive Japanese cars, wear cheap Chinese garments and phones but our moral compass is as far from the global medium as the distance between Mars and planet Earth.

Nigerians would argue that both General Vance and Admiral McDonald are full-fledged adults. If their wives are not heading to the divorce courts and their troops are not complaining, why accept their resignation over marital infidelity? But the Canadian society feels shamed that their personal conduct, even as mere allegations yet to be proven, makes them unqualified to hold high office. In Nigeria or elsewhere in Africa, these are no scandals.

Those familiar with what goes on in government guesthouses and the raucous parties that go on would agree that the mzungu moral gauge would have no effect here. Canadians are witnessing the downfall of commanders of weapons of mass destruction for alleged crimes not connected to their professional calling. These are fine officers in their own right.

If Nigeria had a dollar for every scandal that now serves as a crimson stain on the white garment of national integrity, we’d all be competing with Dangote and Alakija at the bank. Days before the McDonald affair, Mark Machin, the chairman of Canada’s largest pension fund, called it quits after it was discovered that he had sneaked into Dubai for a dose of the coronavirus. He couldn’t wait for the Canadian rollout! Two other politicians have resigned for taking holidays, on their own money while the country was on lockdown. Canadians felt insulted that they were being asked to stay at home (and get paid for it too) while their politicians were enjoying personal luxury trips.

If you check the number of Nigerians renouncing their citizenship on Twitter for Canadian immigrant status, and the queue on the IELTS line, you would understand that the Canadian deep freeze is not a barrier to their life ambition. The new Andrews checking out are searching for peace, tranquility, freedom and respect for the sanctity of human life; ideals that have become myths to most Nigerians. They are not deterred by -40 degrees with the wind chill.

So, over 300 schoolgirls were abducted in Jangebe, just weeks after a similar abduction took place in Kankara and nobody has resigned for dereliction of duty. The man who runs the show from Abuja has said nothing and demanded nothing. Scratch that because Garba Shehu, who reads his mind, has sent out the disappointment of the commander-in-sleep. Days later, Aviation Minister goes to Zamfara to reveal that the Jangebe abductions would be the last. Believe that if the sun rises from the North!

Nigerian state governors have confessed to crossing borders to pay protection money to organized brigands. Others have burrowed into deep forests to pay courtesy visits on bandits and to take selfies. Nigerian citizens do not expect to be protected against criminal gangs. They do not hold their elected officials accountable for dereliction of duty. Those elected officials wear shame as a garment of honour because they are immune from the brigandage.

It is now common for police officers to go to work in mufti and change at the station to avoid being identified, but even that situation has not nudged their dead conscience back to life. As those who have to need to go to police stations know, bail is free but a visit is costly. Faced with kidnappers, Nigerians know better to negotiate with the captor than trust the government or law enforcement.

In the midst of all the insecurity in this country, we have an athletic Inspector General of the Police who stays glued to his seat even when his term has expired without commensurate dynamism. We have a minister of interior, defence minister and service chiefs who would be wearing their garment of shame as they are chauffeured to meetings that change nothing. We have officers sitting in as DG of the State Security Service, Director of the National Intelligence Agency whose statutory duties ought to be the protection of the poor girls of Jangebe, Kankara and everywhere but who sleep on duty and wake up to be saluted.

Here’s the deal Prime Minister Justin Trudeau; reject the resignation of Admiral McDonald and stop making my president and his shameless cabinet and appointees feel as if they owe us the moral courage to resign in the face of failure. It is not a universal principle. In Nigeria, public office comes without the commensurate responsibility of service to the nation.

This comment has been republished from the Daily Trust with the author’s permission. 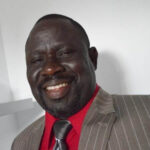 Tunde Asaju is a Nigerian journalist living in Ottawa. Formerly, Asaju held positions as the Head of Press and Public Affairs for the British High Commission in Nigeria, Chief Secretary to the President of the Nigerian Senate, and as a correspondent for Radio France Internationale. He currently writes for the New Canadian Media among other publications.