When asked if her love of reading was fostered by any particular person in her childhood, nothing comes immediately to mind for poet Gillian Sze. Sze’s third book of poetry, Peeling Rambutan, came out last month, and she has met me at Café Shaika in Montreal’s NDG neighbourhood. After thinking for some moments, the poet fondly recalls circle time in Kindergarten and Grade 1, and even names her teachers. A more dominant memory, however, turns out to be an image she has, not of a parent reading to her, but of herself reading to her father from a very young age.

Sze is first-generation Canadian, born in Winnipeg to Chinese parents. It is fitting that her father has come up so early in the interview, as Peeling Rambutan is a tribute to the author’s parents and ancestors, in particular her maternal grandmother. Sze took a trip with her parents in 2008 “back home,” to Malaysia, where her father has relatives, and to China, where her parents came from.

In “Mapping the Village,” the speaker describes visiting her father’s village, which was on the cusp of obliteration. The government had taken over the land, and buildings were being erected in the middle of the existing village, erasing it. The poem describes, on one side, a child squatting to pee and a couple killing a chicken out in the open, while on the other side a tall condo is noisily erected. Despite the literal destruction of the village, Sze makes clear that her family’s roots are deep and cannot be destroyed by change or time:

Next to your house, bordered by trees heavy with tangerines,

is a temple your grandfather built […] Newly renovated, it

gleams with sun-white lanterns and gold words of promise.

Fresh pavement was put in just a year ago, but nothing stops

– as they leak out the concrete square and, again, uproot the

Although the roots are hardy survivors, there is a violence to the uprooting. Just as the government has violently displaced the village, so, too, are families who move on to other places and cultures, even willingly, permanently uprooted from the ground they once knew.

In Peeling Rambutan, Sze beautifully illustrates how a displaced family’s descendants combine their ancestors’ knowledge and collective memories with the ways of their new home to create a place between.

This uprooting can have more ordinary consequences, such as forgetting. In her young adulthood, Sze’s mother lived in Hong Kong, but during their visit she could not always recall where things had been. The poem “In Hong Kong” describes how drastically cityscapes change, so that a neighbourhood or family dwelling that one once knew intimately can be almost impossible to identify years later:

but reappeared the next week, bringing with it her old

could look up and lose direction.

This realigning of memory is echoed in a composite the poet makes by shifting around the women in her family. Sze’s mother is one of seven sisters; between aunts and grandmothers, the poet admits to having combined several female relatives so as to avoid the reader getting “lost” amidst the various characters. This also intensifies the reader’s experience, and has been achieved well in the poem “Harvest”:

have been ripped up to make handkerchiefs. In one, she wraps

up a boat ride to Indonesia. In another, the sound of her

[…]the remainder of a village vernacular.

This last sentence exemplifies the sense of cultural nostalgia Sze delivers without inserting herself as writer into these poems. In conversation, she mentions a penchant for collecting: old paper, stamps, family stories, and even snippets of conversation. Like many writers, she enjoys people-watching with a touch of eavesdropping. There is a strong sense of the observer in her work, as well as the chronicler and archivist, and the participant. The poem “Continuation” provides just one example of a speaker who seems to be collecting images and rearranging them:

Where my grandmother was born
is now a tattered shack

The house it leans on has buckled

Around the corner from the Ladies’ Market,
I pass a woman at a shop window,
practising her smile in the glass.

When asked which of these roles — observer, archivist or participant — she could imagine writing without, Sze is at a loss. She couldn’t give up any of these. She does seem to have given up the persona of the writer, however, which was prevalent in her earlier work. Her first book, Fish Bones, has an almost self-conscious feeling to it, as the poet weaves herself into the work. Peeling Rambutan, however, like the fruit it describes, has shed that skin, leaving only the meaty flesh of the poet’s words to create vivid images, and to hint at the emotions behind them, as in the poem “Eating Fruit”:

In my mother’s language, if one does not have a taste for

a food, one does not know it, as in to comprehend

[…] Eating has become a test of

intimacy, to gauge the extent a mouth can work around a

seed. In the evenings, after dinner, we eat fruits, and

[The] spikes of the rambutans

Sze’s instructional poems highlight the role of archivist. “How to Cut a Cabbage,” “How to Treat Arthritis,” and “How to Maintain Daily Health” use verse to pass down family knowledge and folk medicine. Some of these pieces are sparse, such as “How to Kill a Cockroach,” presented here in its entirety:

she peers at the bottom of her shoe and says,

In Peeling Rambutan, Sze beautifully illustrates how a displaced family’s descendants combine their ancestors’ knowledge and collective memories with the ways of their new home to create a place between. As she writes in “Letters,” this neither-here-nor-there-ness brings for some, “a kind of heartbreak that fills your page with three more words like I exist, still.”

Julie Mahfood is of Lebanese and Scottish ancestry, and grew up in Jamaica. She has a graduate degree in English & Creative Writing and writes for therichest.com. She is also redrafting her first novel. Julie’s work has been published in several journals, including The Caribbean Writer, Grain, Room, Descant, and The Literary Review of Canada. 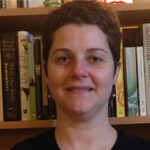