Alberta resident Suleiman Baraka has a tragic yet familiar story for many Palestinians: He has lost his son, a brother, a nephew, and another nephew lost both legs and an eye due to previous Israeli assaults.

Baraka, a researcher in the physics department at University of Alberta, is reeling after Israel’s “pre-emptive” Operation Breaking Dawn military operation, which it claimed thwarted alleged planned rocket attacks by Palestinian Islamic Jihad.

Palestinian officials have said that a total of 44 Palestinians, among them 15 children, as well as members of Islamic Jihad, have been killed in the Israeli bombing campaign, and more than 300 people have been injured, while some 13 Israelis have been treated in hospital for minor injuries.

Although there is now a ceasefire in the conflict, the Israeli bombardments are like a recurring nightmare because Baraka has directly experienced similar campaigns.

“I am deeply worried about my family and home country 24/7,” Baraka told New Canadian Media. “I was tortured for two years in an Israeli jail and all my brothers were also put in jail,” he added.

Baraka was arrested twice by Israeli forces: first time for helping foreign journalists to write about the Palestine conflict, and then for secretly teaching Palestinian students.

Baraka’s ordeal is like a link on a long chain of horrors for Palestinians who have endured severe attacks by the Israeli government.

The tensions began after Israeli forces arrested an Islamic Jihad commander, Bassam al-Saadi, on the West Bank of Gaza. The Palestinian Islamic Jihad militant group retaliated by launching more than 1,000 rockets, aiming them at Israel.

And Israel unleashed a wave of airstrikes on Gaza in Operation Breaking Dawn.

Protests erupted around the world. Palestinian Canadians rallied in cities across Canada on Aug. 15, demonstrating in solidarity with their home country and denouncing the Israeli attacks.

Meanwhile, Baraka’s houses and his siblings’ houses have been ravaged and turned to rubble seven times since he left Palestine in 2019.

Mark Ayyash, a Palestinian-Canadian writer and sociology professor at Calgary’s Mount Royal University, says the attacks affect him and all other Palestinians because they have family and friends who are being killed, imprisoned, tortured, injured and economically suffocated across Palestine.

“It is not easy for us to watch it unfold from a distance. As a writer, what I can do is write about our struggle and try to reach as many people as I can,” he told NCM. 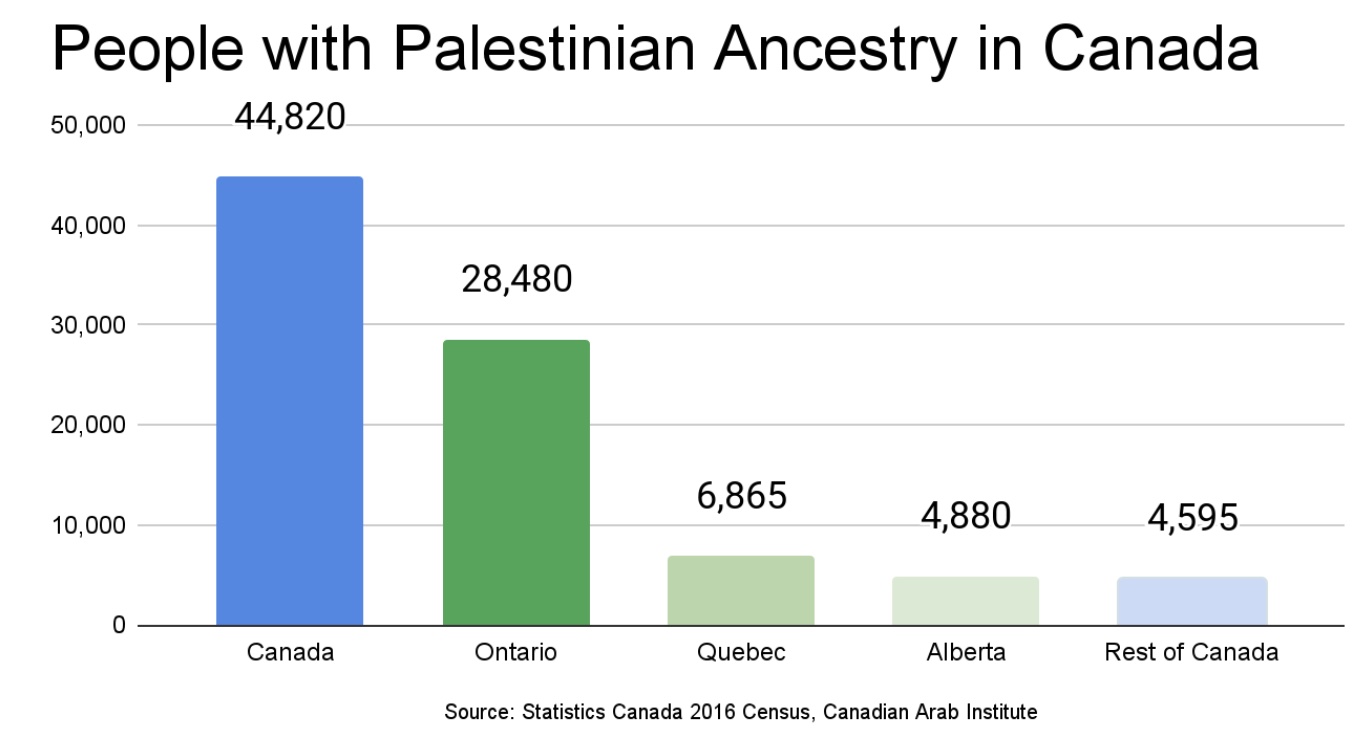 In the 2016 Canadian Census 8,210 people in Canada identified themselves as Palestinians born in the West Bank and Gaza Strip. In addition, Statistics Canada says there were 44,820 people in Canada of Palestinian ancestry in 2016, with the Canadian Arab Institute saying 28,480 were living in Ontario, 6,865 in Quebec and 4,880 in Alberta.

Ayyash adds that Palestinian Canadians will always speak up for the rights of Palestinians everywhere.

“We are a people who have not forgotten, and will never forget, the lands from which we were expelled and continue to be expelled.”

“Palestine will always remain in our minds and hearts, and we will continue to support our cause for freedom and liberation until we are free.”

Ayyash reckons that one of the main reasons why Palestinian Canadians call for resistance is that they think they are on the right side of history and they have  justice on their side. Israel and its allies have nuclear weapons, advanced armies, enormous economic and political capital, and so on. But they have something more valuable than those things.

Despite Canada’s immediate response to Russia’s invasion of Ukraine, it turns a blind eye to Israel’s brutality in Palestine.

Michael Bueckert, vice president of Canadians for Justice and Peace in the Middle East (CJPME) said that Canada’s muted approach to Israel’s recent attacks is completely inadequate, as it failed to condemn Israeli aggression and apparent war crimes.

Bueckert’s organization recently issued a report which found that Canada’s exports of military goods to Israel have accelerated in recent years, and in 2020 reached their highest level in more than three decades.

Ayyash says there are two main reasons why Canada keeps quiet about Israel’s actions in Palestine.

One: “Because Israel is part of the Euro-American imperial hegemony, it was created as a settler colony in Palestine.”

Two: “Israel has always served the interests of European and North American powers and that is why they support it. They see Israel as an extension of their strategic and imperial interests in the region.”

What must be done

It’s obvious to observers such as Bueckert, Ayyash and others that if Canada indeed stands for democracy, freedom of expression, peace and other civil rights, it must denounce Israel’s atrocities as it did with Russia.

In addition, Bueckert believes that Canada needs to immediately stop selling weapons to Israel to make sure that they are not being used against civilians.

And Canadians themselves must be vocal on this issue, Bueckert said. “It is important for Canadians to express their opposition to Israeli attacks on Gaza, to show solidarity with those under fire and to put pressure on the Canadian government.”

“There is no logic to the contention that Israel is a tool of imperial hegemony or that [it] is a settler colony. In fact, the truth is the exact opposite. Israel, as the nation-state of the Jewish People, is the very epitome of anti-colonialism, being home to roughly half of the world’s Jewish population, who are indisputably indigenous to the Land of Israel for the last three thousand years,” Fegelman said in an e-mailed statement.

Publisher’s note: this report has been updated to include a comment from Honest Reporting Canada.

Diary Marif is an Iraqi Kurdish journalist based in Vancouver, Canada. His writing has appeared in the Awene weekly, Livin, and on KNNC TV as a documentary researcher by the name Diary Khalid. Diary earned a master's degree in History from Pune University, in India, in 2013. He moved to Vancouver in 2017, where he has been focusing on nonfiction writing. He can be found on Twitter: @diary_khalid.