Earlier this week, United Way Greater Toronto released an unsettling report that included the summary that “It doesn’t matter how long you’ve been in Canada – the fact that you weren’t born here means that you are earning less.”

The report shows income trends between 1980-2015 for young people, immigrants, and racialized groups in Peel, Toronto, and York regions. It was a reality check in how far income inequality has persisted, and even grown, over the past 35 years by key socio-demographic characteristics. The numbers pertaining to Canadian immigrants – who make up over a fifth of the country’s population – concerns me most.

The report found that immigrants have actually become poorer over time, and that “the average income of longstanding immigrants, who have been in Canada for more than 20 years, has not increased in 35 years.”

The province of Ontario receives the highest number of newcomers in the country. Half of the Greater Toronto Area is made up of immigrants. And while many do contribute significantly to the economy and workforce, it is clear that there is still so much untapped potential. We know that most newcomers arrive as economic immigrants who are highly skilled and ready to work. But oftentimes they cannot find employment that matches their education, skills, and professional experience, and are forced to take on survival jobs. This costs all of us, especially when Canadian employers are constantly addressing challenges of skills shortages in this age of competition for global talent.

An immigrant in Canada who has been in the country for 10 years or more should not be earning 67 cents for every dollar earned by a Canadian-born employee in a permanent, full-time job doing the same work.

The report shows us an even grimmer view of the challenges for immigrant women. Despite overall income gains for both immigrant and Canadian-born women, there is a pronounced gender gap because, as the report says, “Immigrant women continue to be one of the groups with the lowest average income but immigrant men are not far ahead as their average incomes decline, particularly those in non-standard employment.”

The numbers align with the Toronto Region Immigrant Employment Council’s (TRIEC) recent report entitled “State of Immigrant Inclusion”, which explored key issues in immigration and employment in the Greater Toronto Area over the past 15 years. It found that immigrant women with a university degree or higher earned almost half the amount of their counterparts born in Canada – a fact that has not changed in the last 15 years. Furthermore, only 37 per cent with a bachelor’s degree or above occupied a job that required university education, compared to 54 per cent for immigrant men with the same qualifications.

How do we buck the current trend of a greater divide and see a labour market that works for everyone regardless of age, immigration status, gender and race? First and most importantly, employers have to recognize the value of immigrant talent, the value of international experience and the value of international education. At TRIEC, we work in partnership with employers to help them develop more inclusive workplaces that are immigrant-ready and immigrant-friendly. We encourage them to embrace bias-free hiring practices and on-boarding that genuinely supports immigrants. We want their teams to develop inter-cultural competencies so that team members working with newcomers understand how to get all the value from diversity and create the truly inclusive workplace.

But while we work with employers to become more inclusive, what can immigrants do to help to close the gap in salary? The issues are systemic, but here are a few ideas:

Canada is still grappling with economic inequality and these shocking numbers from the United Way show that we’re going backwards, not forwards. We urge governments, employers and citizens to treat this report as a call to action. We will all need to work together to make long-term, durable change so that the prosperity of our country is shared equally. 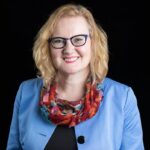 Margaret has over 20 years of experience in the non-profit sector. Since 2012, she has served as Executive Director of the Toronto Region Immigrant Employment Council (TRIEC), a multi-stakeholder council that brings leaders together to create and champion solutions to better integration immigrants in the GTA labour market. In 2012, she was awarded a Diamond Jubilee medal for contributions to literacy and culture. Margaret has an MBA from the Schulich School of Business at York University.