Growing up in a working class neighbourhood in Calgary, there were only a handful of entertainment choices our family could afford, one of which was to attend a football game (or “soccer” in North America). My father frequented the stadiums with me to watch professional games almost every other week. For me, it also seemed to be a perfect ‘match’ with our family’s blue-collar mentality.

Hindsight is 20/20, but I have never regretted coming to Canada (from Hong Kong). I first found myself in “cowtown” in the spring of 1994 (at the age of 17). There is no doubt I missed my hometown, even though I sailed through my school days smoothly. The very first portal that allowed me to expand my circle of friends was a local Chinese soccer league in suburb Calgary. Participants spoke the same language, both linguistically (Cantonese) and physically (the game of soccer). This crucial experience also ‘kicked away’ my homesickness.

In fact, sports brought me closer to Canadian culture, gave me the opportunity to make many friends through participation in sports. When I was 16, I realized half of my dream to become a pro-football player: I played for the reserve squad of a pro team.

I’ve often asked myself, can we draw parallels for immigrants from other ethnic backgrounds? My answer is, Yes. Of course, this has to be accompanied by other factors, including deeper conversations.

A recent study, “Playing together – new citizens, sports & belonging,” published by the Institute for Canadian Citizenship (ICC), found that the faster new Canadians start playing together, the more inclusive and better our society would be. “Our study is focused on new citizens, rather than new immigrants, because they have more bandwidth to engage with their new country after the initial frenzy of settling down. They now simply want an invitation to play,” said Gillian Smith, ICC Executive Director & CEO.

Soccer, at 18% of respondents in the ICC survey, is the top sport that new citizens regularly play. Others include running (39%), swimming (32%), cycling (26%), badminton (12%) and tennis (11%). More importantly, 69% of those who played sports within their first three years in Canada believed it helped them learn about Canadian culture.

It has surely worked for me.

Among the top six, soccer is the only contact sport that is played in a team environment at all times. In my opinion, this platform offers a different complexity and dynamic: through the process of participation, new citizens learn how to adapt and blend in their values to the Canadian society. This blend-in happens both ways: both for newcomers and the native-born. It is important to note that immigrants from places such as Europe and South America play a big part in playing and coaching in Canada. This is a far cry from the conflicts and cultural clashes that are reported from venues where the game is played between people of different ethnic origins.

Sports as an entrée

Through sports, I was lucky to get connected to my first gig in broadcasting. I’ve always felt that the media plays a very important role in promoting inspirational stories for society to embrace diversity. I was fortunate to always have had a sports segment over the years when I worked for Fairchild Media, CBC Radio Calgary and OMNI Diversity Television.

In an interview I conducted in June this year for the Canadian Ethnic Media Association (CEMA), Harnarayan Singh, who is a third-generation Punjab-Canadian and the host of renowned Hockey Night In Canada in Punjabi on CBC, told me that while many South Asians applaud the show because it gives the community a sense of belonging, a very small portion of Canadians still see him as a guy-in-a-turban. He would sometimes receive hate mail. A few of them told Singh ‘to go home’; some others simply expressed opinions that betrayed their ignorance.

Singh believes that it will take persistent education and a strong will to push through these obstacles, even though the show promotes hockey, a sport that most Canadians are proud of.

Speaking of education, a local curling club in Calgary recently hosted an open house for newcomers. David Bubola from Calgary Curling Club is the event coordinator and a licensed curling coach [see video below]. He is surprised that many Canadians have never experienced curling, which is considered another national pastime. Yet, curling is considered to have low entry barriers for participants —  affordability ($120-$150 per hour shared amongst two teams of four players), simple equipment (a pair of sneakers and water-resistant pants, a tee shirt), and accessibility (ice sheets are often available on weeknights in many rinks).

David believes that often times patriotism tends to bring people together as they all share a common identity — being Canadian. It echoes the ICC study that found that new citizens feel the best part of attending sporting events is the atmosphere. The study also emphasized that major sporting events like the Stanley Cup playoffs, the Olympics or the World Cup of soccer, can be pivotal in helping solidify new citizen identification with their community or nation.

In many other interviews I have conducted throughout my career, I have heard of a member in the national women’s wheelchair basketball team who desperately sought financial support; I have heard athletes in pole fitness or pole dancing who were victims of sexual harassment; I have heard from an organizer of the sport of Sepak Tekraw that the group could not find a venue simply because it is perceived as a ‘dangerous sport’; I have also heard that local associations always lack marketing skills; and that the mentality in many NGOs has to change.

Participation is a first step, whether it is a pick-up game on the street corner or a league at the grassroots level. Canada is moving in this direction, according to the ICC study. The media can play a role, helping shape  perception of sport, raising awareness and popularizing activities that play a vital part in shaping our society.

Sport is a common denominator, a social equalizer, a neutral platform that breaks many, many barriers.

See also: More than a Game: The Politics and Potential of Sport, August 7-10, 2014 at the Couchiching Institute on Public Affairs 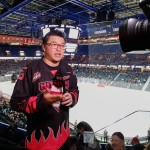