#Muslimyouthdb8 Face Off with All 4 Parties - New Canadian Media

The hashtag #muslimyouthdb8 was trending nationwide Friday. It emerged from a federal debate organized that night by Canadian Muslim youth, held at the Aga Khan Museum in Toronto and livestreamed across the country. The debate was titled ‘Young, Canadian and Muslim: Making Our Ballots Count!’ .

The event was moderated by two seasoned journalists, Naheed Mustafa, an award winning freelance broadcaster and writer, as well as Ginella Massa, a video journalist at CTV Kitchener. The questions posed during the debate were based on consultations by organizers with Muslim youth in the Greater Toronto Area (GTA). Some topics covered were decided upon prior to the event while others were taken directly from questions tweeted by online viewers.

The 5 issues raised were:

The first half of the debate centered on questions around security and particularly Bill C51 (anti-terrorism) and Bill C24 that allows the government to revoke Canadian citizenship from dual citizens who are convicted of terrorism, as well as immigration and Syrian refugees.

The Green Party, NDP and Liberal candidates all agreed that Bill C24 should not stand and is harmful to Canadian society. “The best place for this legislation is the garbage can,” asserted McCallum. Conservative candidate Jivraj, however, continued to defend the bill. “Taking away the citizenship of a terrorist is legitimate because your act takes away your right to be Canadian”.

On Bill C51, the NDP’s Cash was quick to highlight that his party has continually voiced its opposition to the legislation. Similarly, Shahbaz from the Green Party noted that his party was the first to speak against the Bill.

McCallum, on the other hand, explained that the Liberals understand that this law is flawed and will amend it once they assume power. He added, “We will put in place sunset clauses, similar to those in the post 9/11 Bill, so that it has an end date.”

Jivraj insisted that as a Muslim he did not find the Bill threatening in any way or find it targeting Muslims. If anything, as a Muslim he felt his security was further protected by the legislation.

The debate continued with questions on the Syrian refugee crisis and the changed immigration laws in Canada. The NDP, Green and Liberal party candidates seemed to agree that Canada is today a less welcoming place because changes to the immigration laws in the last decade have made immigration and citizenship very difficult for many.

“Our immigration system needs an overhaul to go back to being the welcoming place we’ve been,” said Shahbaz of the Green Party, seeming to reflect the sentiments of the Liberal and NDP as well.  To which the Conservative candidate responded, “My colleagues seem to think that Canada has become a less welcoming place” and was interrupted by all three candidates in unison saying, “it has!”

He continued, “but we have the highest numbers of immigrants this year in recent years.”

The candidates continued to explain the differing plans they had for welcoming more Syrian refugees. The Liberal and the NDP argued over how many refugees should be welcomed and their respective plans. On the other hand, the Green Party maintained that climate change was what caused the displacement of 1.5 million Syrians and that we don’t discuss this factor enough.

Jivraj maintained that the refugee problem must be dealt with from its roots, through military action against ISIS (Islamic State in Iraq and Syria).

The final question, and perhaps one that has never come up in any other party debate, was on the Boycott Divestment Sanctions (BDS) movement taking place on many Canadian university campuses to protest Israel’s illegal settlements.

The panelists were asked, “[W]hy should this (BDS movement) be considered an illegitimate alternative … to advocate for Palestinians in a non-violent way?” Jivraj was the only candidate to unequivocally say that BDS was an anti-Semitic hate movement that had no place in Canadian society.

While the Liberal’s McCallum tip-toed around his support or disapproval of the movement, he did assert that his party stood behind a two-party solution to the Palestinian-Israeli problem. Cash from the NDP thought the sanctions movement is a viable and peaceful form of protest to Israel’s actions for those who wanted to take that route.

Shahbaz from the Green Party was the only candidate to support BDS, its intentions, and assert that opposing Israeli government actions “does not make you an anti-Semite”.

While there may not have been a clear winner in the debate, it looked like a number of the statements of the Conservative candidate Jivraj did not sit well with the audience. Many of his assertions were received with collective gasps from the audience or blunt responses from the other three candidates on the stage.

The Liberal veteran McCallum’s statement in the closing remarks received a loud applause and seemed to sum up the takeaway message for those attending: “Vote strategically, whether it is a Liberal or NDP that is more likely to win in your riding, but at the end of the day, let’s get Harper out.”

Editor’s note: an earlier version of the story misquoted the question relating to BDS. We apologize for the error. This version also has a new, updated lead paragraph. 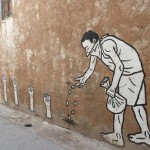