Some 50,000 international students are relieved after Minister for Immigration, Sean Fraser, announced the temporary extension of Post-Graduate Work Permits (PGWPs) expiring between January 31 to December 31, 2022. However, there are thousands of international students who don’t qualify for this 18-month extension, namely those whose PGWPs expired between November 27, 2021 to January 31, 2022.

According to IRCC, about 95,000 post-graduation work permits (PGWPs) expire between January 31 and December 31, 2022. While many former students with expiring work permits have already transitioned to permanent residence or applied for permanent residence, IRCC anticipates as many as 50,000 applicants could benefit from this temporary measure.

PGWPs were made renewable in 2021 but the short-term policy change ended in July 2021. It was available to graduated students whose work permits were expiring until November 27, 2021.

The Migrant Workers Alliance for Change, an organization of international students, farmworkers, and care workers, in a recently released press release says, “The current program announced on April 22, full details of which remain unclear, applies to graduated students whose work permits expire between January 31 and December 2022, arbitrarily and unfairly leaving out those whose permits expired between November 27, 2021 and January 31, 2022.”

“It’s clearly an oversight on the part of the government.” says Mikhita Arlou, an international student whose PGWP expired on December 5, 2021.

“I have only one question to Minister Fraser: what crime did we commit to allow this oversight?” Arlou says this oversight can cost people their future. “Revise the eligibility, make justice,” he says.

Originally from Belarus, Arlou says if the government doesn’t extend his PGWP, the only option before him is to leave the country and go home to face life in a war-stricken land. “Half of my family lives in Ukraine and I lost one of my cousins to the war, he was serving in the military. How can I go back there now?”

Arlou says even during the peak of the pandemic when recruitment was frozen, he managed to get a B-level job with Bell Canada and completed one year of work experience. Just when he got a promotion and a contract extension for another year, he found out that he may have to leave the country.

“There is a labour shortage, my employer needs me, and Canada needs my taxes too. If my employer were to recruit another person, that means more resources and time spent unnecessarily. This exclusion doesn’t benefit anyone,” he added.

In 2021, around the time when he found out that there won’t be Canadian Experience Category (CEC) draws, Arlou says he was diagnosed with a mental illness — “I was depressed. I was in therapy but now, I can’t even have that basic need fulfilled. I don’t even have healthcare.”

The IRCC recognizes the role international students play in addressing Canada’s labour shortage. “Those nearing the end of their PGWP are already well-integrated into Canada’s labour market.” Many excluded students are hoping for the IRCC to include them in the new PGWP extension as Twitter indicates.

Ever since Minister Fraser made the PGWP extension announcement, several international students whose PGWPs expired between November 27, 2021 to January 31, 2022 have been tweeting requesting the immigration minister to include them in the PGWP extension. 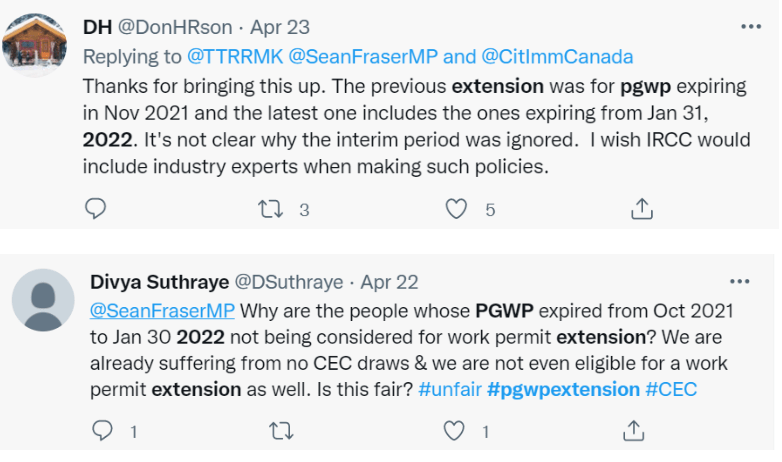 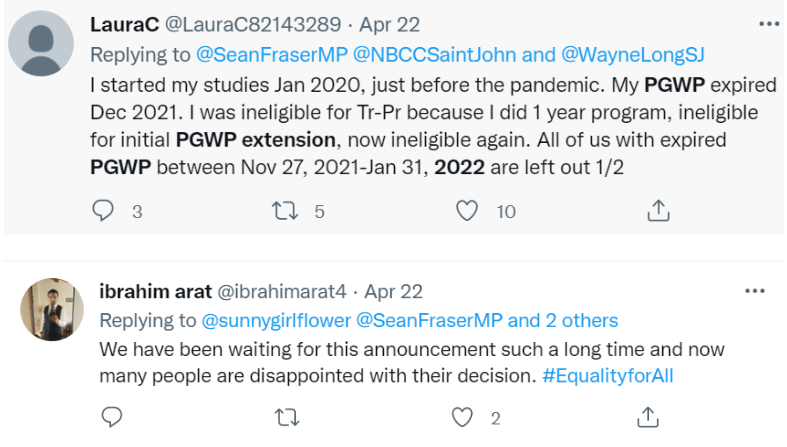 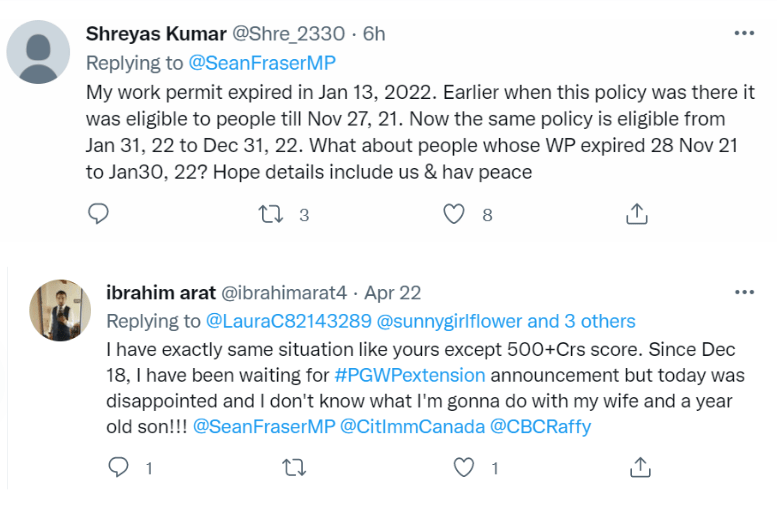 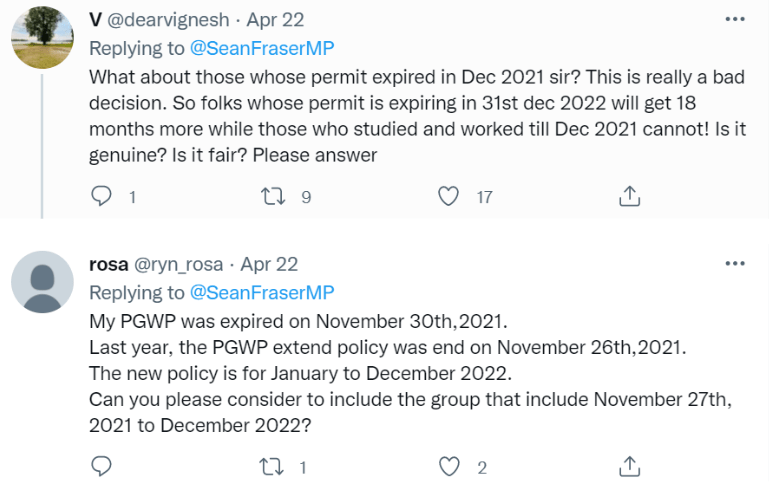 Elif Arat and her husband Ibrahim Arat arrived in Canada from Turkey in December, 2019, Arat on a study permit, her husband on an open work permit.

After completing a one-year project management course at Georgian College, Barrie, ON, Arat who was pregnant at that time, worked as a cook in Montreal even when the pandemic was at its peak.

“I was scared for my baby but I had to work even when people were isolating— I had to somehow complete one year of work experience, to be eligible for Canadian Experience Class (CEC) and I had to do it right then as my PGWP was only for a year,” she said.

After visitor visas for her parents were rejected, Arat said her husband had to quit his work in a manufacturing company to take care of the baby.

“Our situation was dire. We were really disappointed, desperate and lonely. He is our first baby, we had no experience with baby care but I had to continue work.”

On September 30, 2021, when Arat became eligible to apply for permanent residency through CEC, she quit work to take care of her baby. However, as the IRCC stopped CEC draws on September 14, 2021, they didn’t get an invitation.

In the meantime, Arat’s husband resumed work to support the family but on December 18, 2021, their work permit expired and he quit work despite them not having a source of income.

Currently waiting to hear from the IRCC on their visitor visa application, Arat says they have not been working for more than four months. “We don’t have health insurance and we are depleting our savings.”

Arat said they waited desperately for months to hear from Minister Fraser about CEC draws and added, “nobody can describe our stress, anxiety and depression.” She says a lack of communication from the IRCC about CEC draws for months put them in limbo.

“After seven months of silence when Mr. Fraser was to announce a new policy on April 22, 2022, about PGWP extension, we were so excited and couldn’t sleep, but unfortunately because our work permit expired in December 2021, we don’t qualify for an extension.” 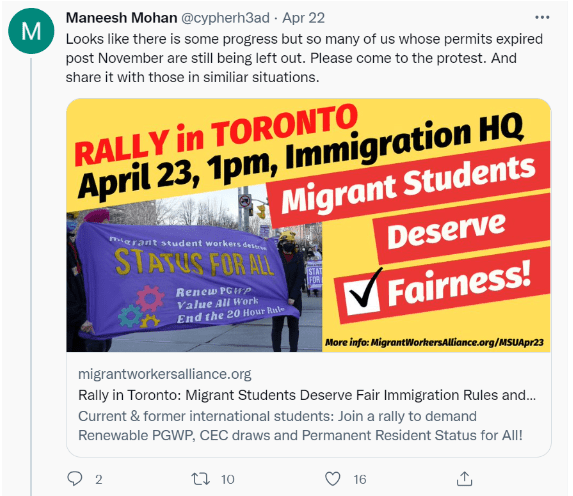 The Migrant Workers Alliance for Change organized a Toronto Rally at Immigration HQ on Saturday, April 23, 2022, to demand the inclusion of expired PGWPs between November 27, 2021, and January 31, 2022.

“The changes today are a result of migrant student workers organizing,” said Sarom Rho, Migrant Students United coordinator, welcoming the new extension. “Over the last year, migrant student workers have been speaking up, visiting Members of Parliament, signing petitions, marching on the streets and organizing online to demand changes, and it’s taken the federal government nine months to announce another temporary one-off program while thousands have fallen into debt, forced to leave or become undocumented.”

BUT TOO MANY ARE EXCLUDED: Low-wage workers, and those whose permits expired Nov 27 – Jan 31 are shut out.