LOOKING IN: Proposing their way out of Ghana - New Canadian Media

“Sssstttt.” I looked back. Unlike in Canada, a forceful push of breath through open lips and locked teeth is socially acceptable in Ghana. The intended targets of the hissing are often cab drivers, street hawkers, waiters or waitresses. And it gets you service, not a dirty look.

But even though I don’t roam the streets of Accra, the country’s capital, driving a taxi or selling goods, I get hissed at all the time. My supposed “service” is valued and noticed primarily by Ghanaian men.

As common as the hissing is, I still turned to see a not-so-common punter running toward me the other day. He was a policeman with a gun strapped to his back. “Am I in trouble?” Far from.

“Obruni, I want to marry you,” he said, trying to catch his breath from both excitement and his light dash. Obruni is the Ghanaian term for a person from outside of Africa, usually white.

This was the fifth such proposal that day. And all asked before hearing me speak. The policeman’s ticket number, issued by me and not him, and his disregard for the supposed authority role, marked this as a watershed moment.

It’s when I started investigating why some Ghanaian men obsess over marrying obruni. My guess was that it might be their easiest way to get out of Africa, considering how difficult it is for Ghanaians to cross into more prosperous countries. I made my way to the Canadian High Commission to confirm my suspicions.

There, Michael Opoku Gyebi, 21, was nearly in tears after a man handed him his passport with his student visa for Canada pasted inside. Gyebi had dropped it off two weeks earlier as he planned to study accounting at the University of British Columbia. He wasn’t sure of his application being approved.

“I’m just excited,” he said, staring closely at the keypad on his cellphone to compensate for his trembling hands trying to dial home. “My dad is going to be so happy.”

Although meticulous, he said the process to get his visa was reasonable. He had to verify his school’s acceptance, and that his family can financially support his education. He spent $125 (Cdn) on an affidavit to confirm the above information.

His medical exam, about $100, had to confirm he is in good health. This included an x-ray of his chest and blood tests. Finally, he paid his CND$150 application fee when handing over his passport for a multi-entry visa.

U.S. universities too had accepted Gyebi for admission. “I chose Canada because I know it is peaceful,” he said after being told by friends already studying across North America. They also value Canada’s education system, he said. “It’s practical.” Gyebi wants to return to Ghana to run his family’s road construction business when he completes his degree in four years.

Like Gyebi, other Ghanaians stood in line at the mission waiting to retrieve their passports. Aside from the common grumble about paperwork, all had positive feedback on Canada’s visa application process.

Anthony Teye, accompanying his brother applying for a visa, said he has already been to Canada three times: “I didn’t go through any hassle.” A few years ago, he obtained a single entry visa to attend a conference on water management in Ottawa. “It was approved the same day,” he said.

Teye has also been to the U.S. and said he prefers the Canadian application process. In-person interviews are mandatory for U.S. visas, unlike the Canadian system.

“I usually don’t compare apples with oranges, so I take a country on its own” said Teye, who has been interviewed for both countries’ visas. “But the U.S., sometimes they don’t really want to listen to you and look at your actual circumstances. They base their decision on how they feel. I find the Canadian interview to be much friendlier because the questions were related to personal issues.”

Despite this subtle difference, both processes are quite similar and fair, said Teye.

‘White is better than black’

Evidently, you don’t need to marry an obruni to travel to Canada or the U.S. Not knowing what I was still missing, I swallowed my pride and headed to Ghana’s Immigration Service to interview the head of public affairs, Francis Palmdeti, the next day. We shared a laugh when I told him about my investigation. But, his response wasn’t as funny.

“A black man’s fascination is a result of seeing a white lady as of a certain prestigious level,” Palmdeti said. “To have a white woman is of ultimate status. He thinks that white is better than black.”

This outlook, stemming both from the country’s demoralizing involvement in the slave trade centuries ago and now poor education, leads to myths about white women, said Palmdeti. A lot of “unpolished” men think obruni women come to Ghana looking for husbands, he said. “It has to do with upbringing.”

Gulp! I would almost rather if my potential fiancés were motivated by unrealistic visa processes. They’re a lot easier to remedy than views on race.

But, realistically, tighter border controls would only further perpetrate the problem as travel is a part of the solution.

Sitting at his desk in his military-like uniform, Palmdeti’s face lit up when I told him my nationality. “My wife wants to move to Canada!” he said.

And seeing she has visited Canada and is married to a Ghanaian, it’s not to find a white man. It’s because every time she returns from Canada she raves about how friendly people are and how everyone there is treated equally, Palmdeti said.

Perhaps something she wouldn’t have learned without travelling there, and now something I aim to show my hissers during my travels here. How a person is valued should never be based on race.

“For me, if I were to settle with a white lady, I must love her. I should find qualities in her that I wish to spend the rest of my life with,” said Palmdeti. Closed borders won’t let my hissers realize exactly that.  — New Canadian Media

Jessica Campbell is a passionate freelance journalist based in Africa. While on the continent, she has had affiliations to Farm Radio International and jhr: Journalists for Human Rights. In 2014, the Carleton University journalism and political science graduate from Brampton, ON, will relocate her career to South America. 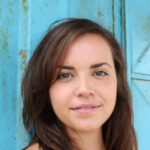