In The Words of Eric Garner: I Can't Breathe - New Canadian Media

Eric Garner died in an illegal New York police chokehold. He wasn’t a gangster. He was a petty criminal. He was suspected of selling loose cigarettes and not paying tax on them. Thousands of white-collar criminals in Canada, the U.S. and across the world evade taxes and swindle people and governments out of billions of dollars. They are treated with kid gloves. No chokeholds put on them.

Being Black in America was Eric Garner’s only real crime. He was minding his own business. He said so. Many Whites in America are coming forward to say they are let go and not arrested for lot more serious crimes. For example, if picked up drunk by police they get dropped at their homes. Not charged or killed. The officer who held Garner down with a chokehold said it was not his intention to kill. Eric Garner died.

The police officers just looked on as he lay dying in handcuffs. They were there. They provided no first aid that they are trained to render as first responders. Seconds before he died in the ambulance, they had just stood there absolutely indifferent to a dying, handcuffed Black man — not a murderer, rapist or a gangster. He pleaded on and on and on, “I can’t breathe.” The cops did not listen or hear or perhaps they did not care. Yes, there was a senior female Black cop with them. How does that matter? The racist culture in a country, an organization or a police department can co-opt, make one numb. The need to conform overpowers many. In any event, Black upon Black cruelty isn’t acceptable either.

I think of U.S. President Barack Obama’s “hope and change” campaign message and I feel sad for him and the U.S. I am so overwhelmed by the moment. Figuratively speaking, “I can’t breathe” either.

I am so overwhelmed by the moment. Figuratively speaking, “I can’t breathe” either.

I think of Ferguson, the unarmed Michael Brown and the officer who shot him and was not indicted; of Eric Garner, unarmed and the choke-holding police officer not being indicted; and many others. The long and sordid saga of racial injustice in the U.S. continues. Blacks are being killed unceasingly at the hands of those in positions of authority. The oxygen of hope and change seems to have turned into an asphyxiating existential moment, a moment of reckoning for the United States of America. I can’t be indifferent. I am finding it difficult to breathe easy.

In Edmonton, Canada, my country and certainly of my children and grandchildren, a police officer Mike Wasylyshen was recently promoted to sergeant despite a criminal record for “the drunken off-duty assault of a man on crutches and a disciplinary  suspension for Tasering a passed-out native youth.” Wasylyshen had without any provocation attacked Devin Stacey who had had knee surgery and was on crutches. All Stacey was doing was hailing a cab when attacked. Wasylyshen also punched a security guard who tried to intervene. He had threatened to kill the security guard and Stacey and to find and burn down their houses.

Waylyshen is the son of a former Edmonton police chief and does an absolute discredit to his father’s name. He has two criminal convictions to his name regarding the above incidents while one charge was dropped. He was at one time temporarily suspended for the repeated tasering of a passed-out 16-year-old Randy Fryingpan in the back seat of a suspected stolen car. Wasylyshen tasered him eight times in 68 seconds. In 2003, a provincial court judge had determined Wasylyshen to have willfully deceived a justice of the peace to obtain a search warrant. Despite all this, he was promoted and not fired.

I can’t be indifferent. I am finding it difficult to breathe easy.

I read all this and I was flabbergasted. This in Canada? I felt suffocated. I could no longer breathe … easy. Something is got to change. Just hoping is no longer enough.

Then, you had the Premier of Alberta protecting the Alberta school boards’ ability to discriminate against gay straight alliances in schools. There was uproar in the country. I became a tiny part of that uproar by writing my blog “Alberta’s Moment of Reckoning” yesterday before the unfair and unequal law was put on hold. Partial victory! Now if only Jim Prentice, the premier, saw the light and showed the courage to lead rather than give in to the ignorant. When I first read about Prentice’s unfair law I felt suffocated. The Bill being put on hold provided a breather.

I read, too, with dread about attacks on minorities in India: the country of my birth and nurture for the first 17 years of my life. Over the centuries, it has welcomed millions from different parts of the world and different faiths. India is home to over 20 million Christians. Christians were reported to have been attacked in Bastar. Non-Hindu religious activity was allegedly banned. Many local Christians were said to have been assaulted and injured. This is one of many attacks against the Christian and Muslim minorities that India has witnessed over the last year. Government ministers and leaders keep making dumb, and often incendiary statements. It is absolutely unacceptable for any minority to be attacked or frightened in the land of Mahatma Gandhi. Reading about such injustice “I can’t breathe” easy.

All this and more I read and felt yesterday. Much else horrible happened as well. Just in one day. I was moved to think of all the good deeds happening in the world, just to counter balance the sadness.

Eric Garner breathes no more! People of goodwill should not breathe easy. This moment should be about affixing responsibility, but not about apportioning blame. It is about our collective will to change so that justice prevails in the world. As within a country justice in the world is indivisible. We must live and struggle to ensure Garners die no more, equality and justice reign, humanity lives in peace and harmony. Otherwise, we are destined to suffocate in the abyss of our own inaction.

Ujjal Dosanjh was the federal Minister of Health under Liberal Prime Minister, Paul Martin. Before this, he was Attorney-General and Premier of British Columbia. He blogs at http://ujjaldosanjh.org/. 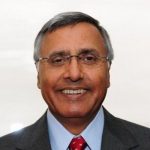