Quebec’s growing obsession with identity politics came to a head, quite literally, last month, when a judge refused to hear the case of a Muslim woman because, for religious reasons, she wore a hijab (a scarf that covers the hair) in court.

On Feb. 24, Rania El-Alloul, a single mother from Kuwait who lives on welfare, appeared in a Quebec court to ask that a confiscation order issued against her car by the province’s Automobile Insurance Authority (SAAQ) – resulting from an infraction with her 21-year-old son – be lifted.

Judge Eliana Marengo took a look at El-Alloul, and asked, “Why are you wearing this scarf? For religious reasons?”

“Yes, because I’m Muslim,” she replied. Without further questioning, the judge suspended the hearing for 30 minutes.

On resumption, Judge Marengo stated that the rules of the court did not allow El-Alloul to wear a hijab, in the same way it’s forbidden to wear a hat or sunglasses. She refused to hear the case if El-Alloul did not remove her scarf and later advised her to consult a lawyer and return to court at a later date to present her case.

El-Alloul, who has no income other than her welfare payments, could not afford to hire a lawyer. Therefore, she was denied her day in court.

In the wake of the divisive electoral debate on the Quebec Charter of Values, which led to the defeat of the nationalist Parti Québécois (PQ) last year, the El-Alloul affair went viral on social media as well-wishers launched a crowd funding campaign to help the Canadian woman hire a lawyer and buy a new car.

The project amassed $20,000 within 24 hours, and has recently earned over $50,000. But El-Alloul says she cannot accept the money as it may affect her status as a welfare recipient. The money may still be used to help; there is talk of possibly setting up a scholarship fund for low-income kids.

El-Alloul says the decision stunned her – after all she had been wearing her hijab when she took her citizenship oath.

“The awareness raised by this campaign has brought us people from all over, who have offered support to carry this issue forward,” El-Alloul wrote in a letter posted on the fundraising website. “As a result, I believe these funds can be put to better use helping those whose rights have been forfeited and stories left untold,” she added.

In an interview with the CBC’s The National, El-Alloul says the decision stunned her – after all she had been wearing her hijab when she took her citizenship oath – and she cried non-stop after leaving court.

The story made headlines across Canada and abroad, prompting Prime Minister Stephen Harper’s office to issue a statement saying that people should be permitted to appear before a judge as long as their faces are not covered. NDP Leader Tom Mulcair and Liberal Leader Justin Trudeau also publicly condemned the judge’s decision.

Quebec Premier Philippe Couillard said that people should only be forced to remove a part of their clothing if it causes problems for, “communication, identification or security.”

El-Alloul now plans to file a complaint against the judge. She says she’s working with the Ottawa-based National Council of Canadian Muslims on a formal complaint to the Quebec Judicial Council, which oversees judges appointed by the province.

Following the successful crowd funding campaign, she has been gathering support from other human rights groups. And another Montreal resident, Jean-Pierre Lussier — who doesn’t know her — has also filed a complaint with the Judicial Council.

Sukania Pillay, executive director of the Canadian Civil Liberties Association, told The Canadian Press that asking El-Alloul to remove her hijab was disrespectful and violated her fundamental right to freedom of religion.

“The courtroom has every right to be secular,” said Pillay. “But that doesn’t translate into telling people what they can and cannot wear in a manner that’s incompatible with their freedom of religion.”

Lucie Lamarche, a lawyer for Quebec’s League for rights and freedoms, said that there is no precedent for judge Marengo’s decision and called it “extremely personal and discriminatory.”

A Push for Secular Values

But not everyone agrees. El-Alloul’s case has become a new battleground for the province’s aggressive push to impose French-style “secular values” on its growing non-Western immigrant population — especially Muslims.

François Legault, leader of Quebec’s third party, the CAQ (Coalition for the Future of Quebec), made the news when he proposed a plan aimed at assimilating immigrants by teaching them French and Quebec values over a three-year period. The purpose being that if they fail their final exams, they would be sent back to their countries of origin.

“Demography and immigration mean we are losing one county every year. We’d wish to control it better, but let’s have no illusions.” – Pierre Karl Péladeau

“We won’t have 25 years to achieve independence,” he said. “Demography and immigration mean we are losing one county every year. We’d wish to control it better, but let’s have no illusions.”

After he was criticized for his statement, Péladeau issued an apology, saying his words did not properly convey his thoughts – but the message to the PQ electorate was conveyed, and the fallout lingers.

Islamophobic incidents are on the rise in Quebec – often exemplified by taunts against hijab-wearing women, acts of vandalism on Islamic schools and desecration of graveyards.

Now, Ville Saint-Laurent, a suburb of Montreal, has ordered the closure of the Al-Andalus mosque citing zoning regulations. And the town of Shawinigan-Sud turned down a request from the local Islamic Cultural Centre to build a mosque there – with social media users welcoming the move, essentially equating mosques to breeding terrorism.

Jooneed Jeeroburkhan, 70, is a journalist, writer, human rights activist, feminist and grandfather living in Montreal. He came to study in Canada, on a Commonwealth scholarship, 50 years ago from Mauritius. He retired from the Montreal daily La Presse in 2009 after 35 years as a reporter and analyst on international affairs, visiting some 60 countries in the process. He published a book of essays, in French, on his native country, in 2010, titled Un autre Maurice est possible (Another Mauritius is Possible). 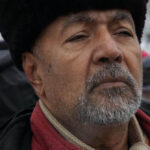