Going for Gold: Nothing Unites Diverse Canadians Like the Olympics - New Canadian Media

Nothing brings Canadians together like sports, especially hockey. We really love our hockey.  Just think about the national pride we felt when the Canadian women and men’s Olympic hockey teams brought home the gold! Yes, the country was glued to their TVs, laptops, and smartphones. Loud cheers could be heard in stores, restaurants, and much of the love was shared online with hashtags that would swell up the Canadian heart with pride.

While watching the Sochi Winter Olympics, I learnt about the intensity and diversity of Canadian national pride. My father-in-law, who is of Egyptian origins, would call my husband after every goal or medal won by the Canadians. He would go over every play, as though he was the coach for Team Canada.  It was endearing, to say the least.

Sometimes we would watch the Olympics together, three generations from three different nationalities sitting together as we cheered on Team Canada. It’s not often that my Egyptian-in-laws, my Canadian husband and kids and myself, a Pakistani-born Canadian, can agree on what to watch on TV. There’s something special about international competition that makes everyone put aside differences and focus on what we have in common.

My love of the Olympics must’ve been contagious, because I see it in my kids. Looking at my 11-year-old son, I think back to when I was his age and a new immigrant to Canada.  I remember it clear as day, mesmerized while watching my first Winter Olympics that took place in Calgary in 1988 and the pride I felt when I heard the Canadian national anthem. When I went to Calgary last year, I had the privilege of visiting the Olympic village, and it was a majestic sight.

In a complicated world with issues that have been around for generations, the Olympics are one of the few events that truly unite the world. An event where people from different parts of the globe come together, meet and compete in a friendly manner. The Olympic charter claims everyone should have the right “of practicing sport, without discrimination and in the Olympic spirit, which requires mutual understanding with a spirit of friendship, solidarity, and fair play.” I decided to turn to some of my friends and colleagues and find out if and why they love the Olympics – to find out what it means to them.

“I feel like the Olympics create the ultimate feeling of team spirit, a camaraderie of sorts,” said blogger Raj Thandi, a Vancouverite born of Indian descent. “Even if you weren’t born in Canada, you can’t help but get caught up in the wave of Olympic spirit.”

For some, it seems like a way to reconcile all the difference in the world. Suhail Niazi, a Montreal entrepreneur, felt strongly that, “The Olympics is the closest we will get to world peace.”

Since hockey is the backbone of communities across Canada, at times cheering for one team or another can put Canadians at odds with one another. Often, discussions over team loyalties can get quite heated. “It’s the one time, we can cheer under one banner as Team Canada,” said Kamal, a Quebec hockey league director.

Year after year, the Olympics can make one reflect on the past and the future. That is precisely what Christa, an Ottawa-based mom and blogger felt. “The Olympics make me reflect upon where I was at this time four years ago and ponder where I’ll be four years from now! Our kids are five and seven right now… at the next Olympics, they will be nine and 11, and that seems so far away!”

But often reflections lead to some difficult observations. Sheerose Pradhan, a Canadian-born Pakistani felt, “the Olympics often bring privileged nations together.” As a social worker, she noted, “Even in Team Canada, we see that minorities aren’t well represented. There should be programs to encourage minorities in Canada to train and compete in the Olympics.”

Though there is always room for improvement, one can’t help but respect the effort and courage of the athletes. “Watching the performances at the Olympics is just awesome!” said Meryem, a snowboarding enthusiast. “It is a good lesson in self discipline and courage. Watching them perform is amazing, because they make something difficult look easy.”

The overwhelming sentiment that seemed to resonate with most of the interviewees was of pride, inclusiveness, and belonging.

“When you cheer for Team Canada, it feels good to belong to something bigger than yourself,” said Maria, a hockey mom. “We can put aside our differences and come together as a country,” observed Mariam.

But cheering for Team Canada doesn’t have to be exclusive. Perhaps Mr. Thandi said it best. “As a first generation Canadian I still feel pride when I see Indians in the Olympics (not that there were many in the Sochi Winter Olympics), but cheering for Canada is a must – it’s part of my identity, just as much as getting excited when I see Anil Kapoor in Mission Impossible for just three seconds!”

Nationalism is defined as “love of and devotion to one’s country.” The love of Canada has no ethnicity and it is as diverse in color as are the trees and leaves in autumn. The world might think that we live in igloos, and that there’s a Zamboni parked in our driveway. And we are sorry we have to say sorry all the time, but one thing is for sure, we will play hockey even if we have to play it with a broken hand. If the world didn’t know it before, they know it now, thanks to Meaghan Mikkelson who assisted one of the goals that won Team Canada the gold in women’s hockey. Or people like Jonathan Toews, who scored the first goal against Sweden in Canada’s remarkable gold medal finish on Sunday. 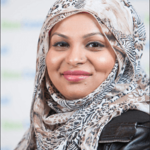