While food has always been a significant aspect of the Chinese New Year’s celebration, also known as the Spring Festival, after three years of pandemic-related restrictions, this year it has become a symbol of people’s desire to reunite with family and loved ones.

For example, for international students who celebrate Chinese New Year away from home, the Spring Festival and the traditional dinner that comes with it is also an opportunity for them to connect with each other.

“Because of COVID-19, it is my first year celebrating Chinese New Year here,” Iris Wang, a second-year art history student at the University of Toronto,  told  New Canadian Media in Mandarin.

This year was Wang’s first time celebrating  away from home with five of her friends.

“The biggest difference between celebrating Chinese New Year in China and Canada is that you can taste a lot of different New Year delicacies from all over China here,” she says.

Wang says because this year the Chinese New Year landed on a Monday (Feb. 1), which meant some of her friends had conflicting school schedules, they decided to “celebrate on the weekend – ahead of time.”

Along with her friends, Wang says they had a combination of dishes they prepared together as well as some takeout, all of which made for a rich New Year’s Eve dinner.

According to her, even seniors, who normally prefer having New Year’s Eve dinner at restaurants because of the convenience, chose to celebrate at home to keep safe, although some restaurants are set to open this month

Ideally, the Spring Festival is celebrated among family, as it is a direct way for people who have been working hard all year to find some solace among loved ones.

So, when people immigrate to Canada, they import not only the traditions but the excitement itself that surrounds the elaborate New Year’s Eve dinner, which has been an important part of the celebration for thousands of years.

In fact, according to records of Zong Yan’s “Jing Chu Sui Shi Ji,” the traditional New Year’s Eve dinner can be traced back to the time of the Southern and Northern Dynasties in China.

As the story goes, in ancient China there was a fierce beast named “Nian,” which translates as “Year” in English, who would break into villages during the winter, when food was scarce, in search of humans to harm.

But the beast was afraid of red, fire and very loud sounds.

Hence the celebratory lights and elaborate dinners that continue bringing families together around this long-held custom.

Unlike Wang, Lucas Chen, a second-generation Chinese immigrant living in Toronto for 14 years, has family by his side. His father immigrated to Canada from the province of Fujian when he was 10 years old.

Because Chen has his family here, he says “the only difference is the place,” because “the custom of celebrating the Chinese New Year” is the same now as it was in China.

For older Chinese, the New Year’s Eve dinner is also the last opportunity of the year for families to come together.

The sharing of food during the Chinese New Year is normally a significant gesture for Chinese people, as it is a time to celebrate their love for family. It is arguably the grandest and warmest of traditions that remain deep inside everybody of Chinese origin.

“No matter where you are, no matter what your citizenship is,” Chen says, the Chinese New Year will always be a time of great celebration, welcoming “friends from all over the world.” 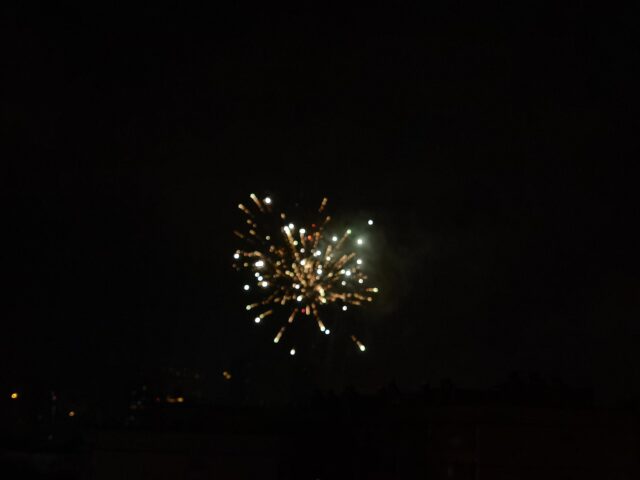 Quanzhou, Fujian, China — The ninth of the first lunar month in China is the birthday of the Jade Emperor of Heaven, also known as the Tian Gong. It is one of the most important New Year celebrations for the Hokkiens and Minnan people. (Photo by Tom Ke). 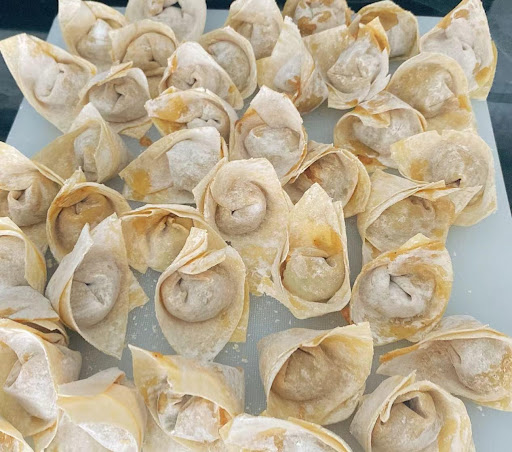 Toronto, ON — For the Chinese New Year Eve's dinner, Doris Chen and her friends made dumplings, a traditional Chinese dish. It is the third year she's come to study in Canada. (Photo by Doris Chen). 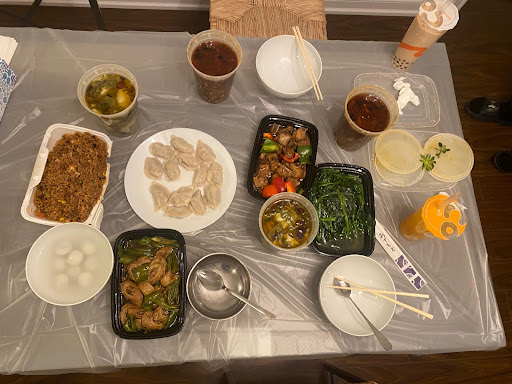 Toronto, ON — As an international student, it is the first year Delta Li celebrated Chinese New Year in Canada. They enjoyed the Chinese New Year Eve dinner together then watched the CCTV New Year's Gala. (Photo by Delta Li). 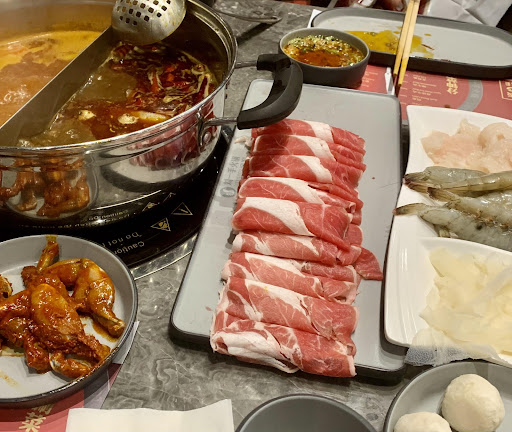 Toronto, ON — Hot pot is a traditional Chinese dish and serves as "comfort food" for many Chinese international students. That is the reason why Chudi and her friends chose to eat Hot pot during the Spring Festival. (Photo by Chudi Xu). 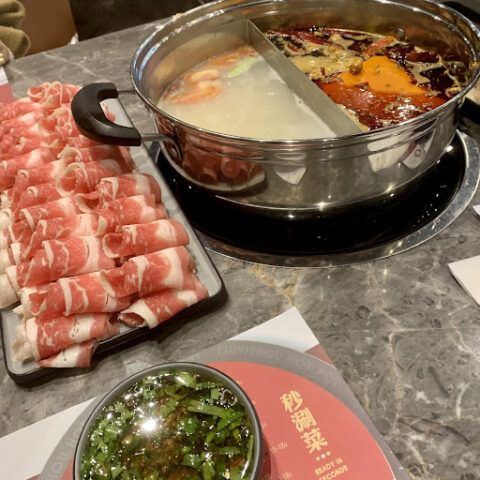 Toronto, ON — Chudi Xu and her friends decided to celebrate Chinese New Year on Feb. 1 in a Hot Pot restaurant. It was the first day that Ontario businesses reopened. (Photo by Chudi Xu). 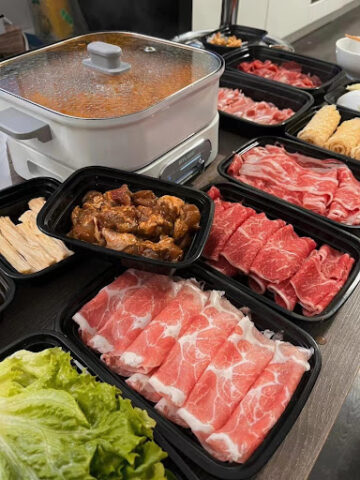 Toronto, ON — Ariel Chen and her friends celebrated the Chinese New Year at home. She is an international student from China now studying at the University of Toronto. (Photo by Ariel Chen). 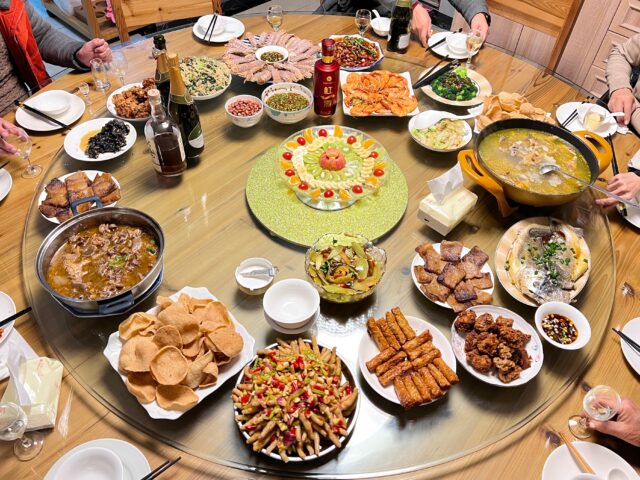 A Chinese New Year without a feast is like winter without snow. In this photo, taken in Wuyishan, Fujian, China. Qimiaolu and her family are enjoying the Chinese New Year Eve's dinner. Fish is always in this dinner to make a wish for an annual surplus. (Photo by Qimiaolu). 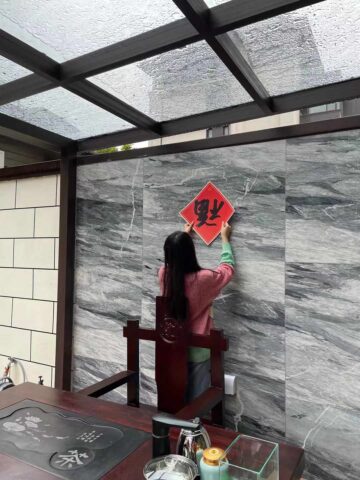 Guangzhou, Guangdong, China — Fred Yu and his family decorate the home to celebrate the Chinese New Year. They labelled the Chinese character "Fu" ("fortune" in English) on the wall, which has been a tradition for thousands of years to hope for a safe and happy new year. (Photo by Fred Yu photo). 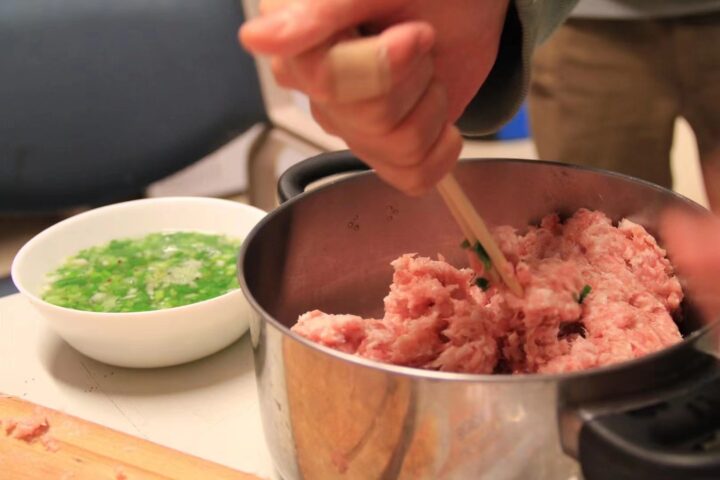 Hong Kong, China — Yuhe Yang and her friends mince the meat for the dumplings. They stir repeatedly to make it firmer and creamy. 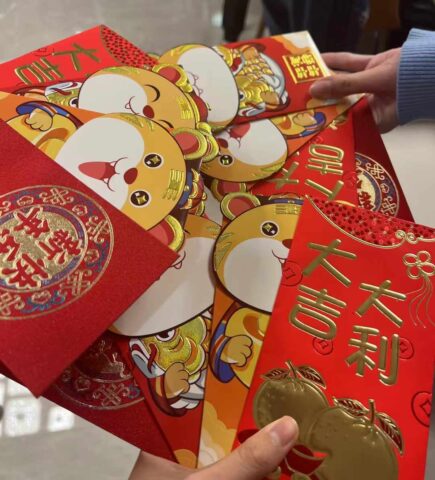 Guangzhou, Guangdong, China — These are the red envelopes, also known as the red packet, which is a monetary gift given during the Chinese New Year. It symbolizes good wishes towards those who receive it in terms of "luck" and "wealth" in the new year. (Photo by Fred Yu). 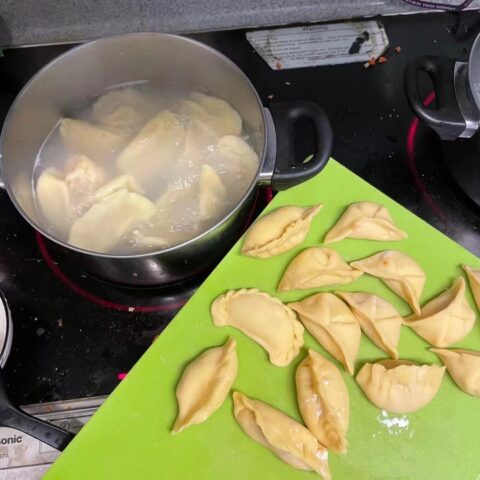 Hong Kong, China — Yuhe Yang and her friends made and cooked the dumplings to enjoy during the New Year's Eve dinner. (Photo by Yuhe Yang). 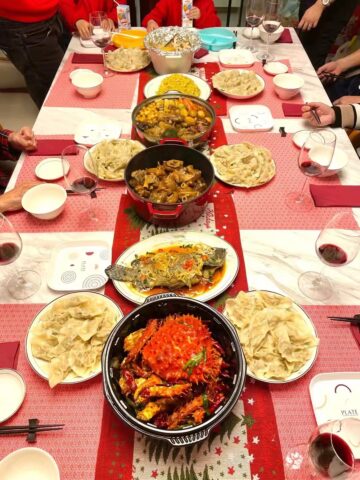 Guangzhou, China — Fred Yu and his family enjoyed the New Year's Eve dinner together. They prepared a gourmet meal for this moment of family reunion. (Photo by Fred Yu). 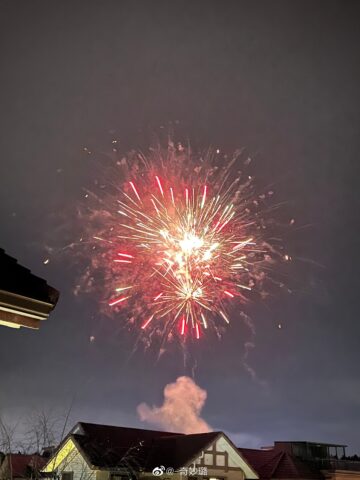 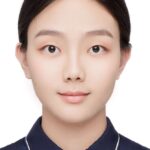