Ferguson Riots: “We Should Confront our Stereotypes About Race” - New Canadian Media

For better or worse, much of our Canadian media, culture and society can be understood as a response to the media, culture and society of the United States. In sickness and in health, Canadians distance themselves from the types of violence and racial injustice that they associate with their neighbours to the south. Following the death of Michael Brown – the unarmed 18-year-old black man killed in August by police in Ferguson, Missouri – the Canadian media reported violent protests that damaged the properties and businesses of their largest trading partner. Following the more recent decision of a U.S. grand jury not to indict the police officer who killed Brown,Canadian journalists emphasized the non-violent nature of Canadian vigils held for Brown and his family.

Since it does not challenge narratives of Canadian peace, order and good governance, Canadian journalists have also been able to pay close attention to the different stages of grief expressed by Americans on the news. They highlight portrayals of angry American conservatives who treat the social activism of young people of colour as a threat to the harmony of their nation. They note the anger with which American pundits trot out the red herring of “black on black crime.” And they acknowledge the types of bargaining in which calls for truth, justice and the American way are replaced with pictures that are more in keeping with hugs, smiles and the sentimental way.

Yet Canadians rarely stop to consider whether sentimentality – “the ostentatious parading of excessive and spurious emotion,” “the mark of dishonesty” and “the signal of secret and violent humanity” – might be a global problem rather than an American one. We don’t consider why America’s racial divisions are treated as a national shame when its multiracial military and cultural products are understood to be issues of global concern. We don’t ask why American journalists call for a national conversation about race even when their articles appear in global news outlets that discuss the fatal shootings of Black Britons by white police officers. Nor do we point out the arrogance of people in the West who bristle at the thought of comparing the United States with nations in the global South, and are shocked by statistics that show similar levels of racial segregation between Chicago and Johannesburg, or a greater wealth gap between black and white in the United States than in South Africa under Apartheid.

The erasure of African Canadians – and the dismissal of African Canadian grievances – is nothing new. There remains a rather grotesque silence about slavery in Canada, as is evident in the erroneous claim of the well-known film director David Cronenberg that one of the reasons Canada is different to the United States is because it “didn’t have slavery.”

If such damning statistics mean that Americans can no longer claim to be “less racist” than South Africans, many Canadians are still able to assume a moral high ground in regards to the United States because police forces in Canada do not consider the collection of race, ethnicity and other characteristics “beneficial or appropriate,” and only tend to report race and ethnicity in regards to  Aboriginal victims or perpetrators of crime. Rather than question these practices, Canadian journalists tend to simplify their message and claim that Canadians “have nothing to learn from Americans about the subject of race.” Even more disconcertingly, some of their articles exclusively compare the treatment of African Americans to the experiences of indigenous people in Canada, and omit to mention the social reality of racial discrimination for many African Canadians.

The erasure of African Canadians – and the dismissal of African Canadian grievances – is nothing new. There remains a rather grotesque silence about slavery in Canada, as is evident in the erroneous claim of the well-known film director David Cronenberg that one of the reasons Canada is different to the United States is because it “didn’t have slavery.” There are also attempts to disparage Black radicals in histories of Black Canada. In Robin Winks’s account of African Canadian history, which is still used in schools and stocked in Chapters and Indigo bookstores across the country, Black immigrants are chastised for trying to apply the insights of militant thinkers to the Canadian context. To go further, such radical campaigns were considered part of a campaign to stir up “militant, noisy, pushy protests” that caused “thoughtless, needless, and frustrated destruction.”

Such desires to guide immigrants and Canadian-born Blacks away from radical protest often ignore the fact that many of the gains of a liberal, non-violent civil rights movement in the United States were linked to the threat of militant pressure. The Civil Rights Bill of 1964 is inseparable from the threat of riots, just as the housing bill of 1968 was a direct response to the riots that swept American cities after the assassination of Martin Luther King Jr. Gloria Richardson, an organizer with the Student Nonviolent Coordinating Committee, remembers that she could go into meetings and say, “well, either deal with us or you will have Malcolm X coming into here.” As I found in my own research on sex and race in Canada during the late 20th and early 21st centuries, moderate Canadian leaders in the Nova Scotia Association for the Advancement of Coloured People also sought to use the threat of a Black United Front and revolutionary violence in order to resist racial discrimination in  Canadian housing, education and employment.

Such desires to guide immigrants and Canadian-born Blacks away from radical protest often ignore the fact that many of the gains of a liberal, non-violent civil rights movement in the United States were linked to the threat of militant pressure.

Given the connections and overlaps between the United States and Canada, it is understandable that Canadians have sought to reaffirm a national identity that is defined against the types of violence witnessed in Ferguson over the past few months. It is also understandable that others undercut these myths by flippantly noting the recent riots in Canada in response to the result of a hockey game. Yet, it may be more productive – morally as well as politically – if recent media coverage of events in the United States forces us to confront our deeply entrenched stereotypes about race and nation. To imagine new ways of belonging – with space and time, and to each other.

Daniel McNeil is the new strategic hire in Migration and Diaspora Studies at Carleton University, where he teaches in the Department of History and the Institute of Interdisciplinary Studies.  He is also affiliated with the Institute of African Studies and Institute for Comparative Studies of Literature, Art and Culture at Carleton. His transnational and trans-disciplinary research  engages with the intellectual and cultural history of the Atlantic world during the 20th and 21st centuries, and his publications include Sex and Race in the Black Atlantic: Mulatto Devils and Multiracial Messiahs (Routledge 2010), the first book to explore the self-fashioning of mixed race individuals in a trans-Atlantic context. 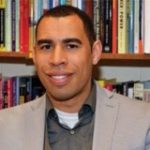