Although I have attended Remembrance Day ceremonies at the National War Memorial in Ottawa in the past, in 2009 I decided to support a smaller event whose theme was peace and reconciliation. I was one of about 300 people who heard an agonizingly sad but ultimately hopeful speech by Dr. Izzeldin Abuelaish. He is a Palestinian pediatric physician and peace advocate whose house in Gaza was struck by an Israeli tank shell on January 16, 2009.

Abuelaish, a widower, was home that day with his eight children and other family members and was scheduled to give an interview on Israeli television via cell phone. A shell fired from a tank hit his house and killed three of his daughters, aged 14, 15 and 21, along with a seventeen-year-old niece. Another daughter, Shada, and a second niece were injured. The journalist who called moments after the attack found the doctor sobbing inconsolably. “My girls, O God, they are dead,” he said. The video clip was broadcast around the world. Abuelaish and his family became the face of the human suffering of Palestinians in Gaza. A ceasefire was declared two days later.

The New York Times describes Abuelaish as “a rarity, a Gazan at home among Israelis.” He told his Ottawa audience that he practiced medicine in both Gaza and Israel and that he has delivered as many Jewish babies as Palestinian ones. His says tragedy has not deflected him from the path of peace and reconciliation. “I am Muslim but we have to go beyond that to think about humanity and what brings us, Muslims and Jews, together,” he said. “I believe that God is good and even tragedy is good. I assure you I am looking forward. I believe that everything is possible other than having my daughters back.”

Ed Broadbent, former leader of the New Democratic Party and a human rights campaigner, was the evening’s moderator. “As a Canadian, a father and grandfather,” Broadbent said to Abuelaish, “it is almost impossible for me to conceive of losing these children as you have lost your daughters.” Broadbent then said to the audience: “It would be easier to understand if Dr. Abuelaish came through that with dreams of vengeance. He continues to reach out to those who might be considered his enemies, but he does not see them as such.” Abuelaish was nominated for the 2009 and 2010 Nobel Peace Prize for his efforts to bring peace between Israelis and Palestinians.

He was in Ottawa as the guest of Potlucks for Peace, a group of Jewish and Arab people who gather monthly to share food and talk about how to pursue peace in the Middle East. The group’s members do not always agree on solutions — whether, for example, there should be one state or two states in the region, or whether Israeli settlements pushed into the Palestinian West Bank are justified in the name of security. I have, at their previous events, sensed tensions over the Israeli occupation of Palestinian lands on the one hand and anxiety about Israeli security on the other. The potluck group appears to hold it all together through mutual respect and discipline. “We believe that out of the willingness to engage in dialogue, solutions can arise,” the group says on its website. “We hope that our very existence sends a positive message.”

Abuelaish’s story has a Canadian twist. He had been invited to the University of Toronto to undertake a three-year medical residency and was making plans to move his family to Canada when his home in Gaza was shelled and three of his daughters killed. Abuelaish did come to Toronto in March 2009. His seventeen-year-old daughter, who was injured in the attack, spent four months in hospital and is now studying computer engineering in Canada.

Abuelaish draws many of his peace analogies from his practice of medicine. “As a physician, I am not allowed ever to give up hope on a patient. We must act and we must forgive each other,” he said. “No one is perfect. We make mistakes. Forgiveness allows us to move forward.” He also said: “As a doctor, I know that hatred is a toxin. The path of light in the long run is the more efficient choice than to live with hate and be consumed with revenge”

He is an inspirational speaker in the best sense, but his response to questions indicated that he is not a politician or diplomat and is unlikely to be one of those negotiating land for peace or the future of Israeli settlements. When asked during the question-answer period if he was in favour of an economic boycott of Israel similar to that against South Africa in years past, he did not answer, but spoke about his high hopes for peace initiatives driven by the administration of U.S. President Barack Obama. Asked whether he favours a one-state or two-state solution for the region, he fell back on a medical metaphor. “Survival is most important at the moment. The first action is to stabilize the patient. One state or two states is theoretical. There is a Palestinian nation and an Israeli nation, and they must live together in peace.”

I did not attend the Remembrance Day ceremony at the National War Memorial that year but I did watch it on television. It is always moving to see the veterans but less so the fly-bys, march bys, and the firing of canons. As I watched and heard the television commentary, it was all about us: our freedom, our sacrifice, our families, and our heroes.

Even the armed forces chaplain who spoke could invoke God’s caring and sympathy only for us. In this ceremony, there was no compassion for the other — for example, the bride and groom and their guests in an Afghan wedding procession, for example, who were bombed to bits in 2008 by an air strike called in by NATO soldiers. No one on Remembrance Day recalls the deadly mess of war that remains for others to clean up after the troops have withdrawn — the unexploded land mines, the buildings and fields in ruins, the shrapnel embedded in flesh, and the body burns from white phosphorous.

Potlucks for Peace and Dr. Abuelaish attempt to reach across a divide of fear and hatred to acknowledge and embrace the other. Our officially planned and sanctioned Remembrance Day ceremonies do not.

This piece was originally published on the blog Pulpit and Politics, and is being re-published with permission from the author in the context of Dr. Abuelaish’s latest campaign to medically treat wounded children from the Israel-Gaza conflict. Read a preview of the campaign in our NCM Newsfeed of Aug. 8 under Back Pocket. 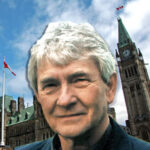