What can I say: I called it.

It may have been my lifetime exposure to dictatorships. It may be my gradual and irreversible loss of faith in humanity that has made me become so jaded.

It may be that I have paid too much attention to the lessons history has thrown at us. And even though I did predict it, it still hit like a bucket of very Canadian ice wintry cold water. Let that one sink in, Canada (and the rest of the world): Donald Trump is the newly elected President of the United States.  The head of state of the most powerful nation in the world. And our neighbour to the south. Our closest ally. Canada’s Big Brother. Just because the people were given the option to choose, it doesn’t mean they chose right. In Canada, the great majority of us mourn that choice.

And so, whatever happens to our southerly neighbours, will have a strong effect on how we live, think and act over here. Not only does it affect us, it sends shock waves through our core. You can see it so palpably in the strong reactions of all Canadians (be it happiness or distress) upon hearing the news.

Trump’s win (and Clinton’s loss) is not only a loss on sanity, logic and sound decision-making. This is a loss on progress and an attack on the liberties and gains that have taken so long and so much effort and struggle to achieve.

At the core of this loss is the notion — a certainty, really — that humanity is flawed. Human beings, we’re all flawed. And with Donald Trump being a businessman, math comes into play in the form of a twisted version of Victor Hugo’s “The liberty of one citizen ends where the liberty of another citizen begins” that reads more like “one person’s gain is another person’s loss.”

If a woman is on her way of earning the same wages as a man, she is perceived (and this is key, because it’s not necessarily truth, but perception that’s so dangerous) to be taking that away from a man. If a visible minority is making progress in carving a better place for him or herself in society (be it through work, to access to health and education, to being granted access to opportunity and power) that means that someone (more likely a straight white male) is losing that very thing.

If a poor person (whether a visible minority or a white person) is improving the quality of their life, that means (again, perceived) that someone at the top is losing a small percentage of their wealth. And that cannot happen.

We as a society must watch very carefully what’s unfolding right before our very eyes. We can see it so much clearer because it’s in high definition: on a computer, on iPads and on our very own smartphones — because everything that has taken place and will be taking place in the future will unfold on social media for the world to see.

Mark my words: this outcome next door will be affecting Canada directly. This could (and most likely will) be Canada in four years.

Mark my words: this outcome next door will be affecting Canada directly. This could (and most likely will) be Canada in four years.

We may boast how multicultural, egalitarian and progressive we are.

But, we need to start listening, really listening to what’s building up at the core of our society: the unhappiness, unrest and fear (terror, honestly) that those who have been at the top and are gradually experiencing a perceived loss of power are feeling.

We must start listening, really listening because as women, visible minorities, the LGBTQ community, the poor and all those disadvantaged sectors of the population are given more opportunities to play on a level field within Canadian society, there is someone on the other side resenting (sometimes silently) these changes and hoping Canada “becomes great again”.

We must, as a society (our leadership, our politicians, our institutions, our community organizations) really listen to those voices, give them an opportunity to express their concerns and unhappiness, because if we don’t, the disconnect (that very same disconnect that created the marked divisiveness that gave Trump that shocking victory) will only widen, and four or eight years from now we will be stunned to learn that a fascist, racist, bigot regime is threatening the very fabric of what makes Canada such a progressive, forward-thinking and humanitarian nation.

In the meantime, God Help our brothers and sisters to the south.

Republished with permission from Alma Latina. Alma Sandoval Betancourth is editor/publisher of Alma Latina, an English/Spanish publication featuring articles about events/arts & music/community/people in Durham Region and the Greater Toronto Area. 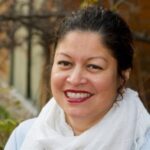