The red borders and maple leaf that adorn our flag should evoke images of blood as we look back on the Canada Day weekend.

The revelations of 1,148 unmarked burial sites of Indigenous children found near three former residential schools in recent weeks has rattled the country. This includes the discovery last Wednesday when 182 sites were found at a residential school on Ktunaxa Nation near Cranbrook, B.C.

The sheer number of victims and the fact that they were children is both horrifying and profoundly sad. But it’s not “news.” More than 6,000 students died because of residential schools, according to documents from the Truth and Reconciliation Commission (TRC). However, its former chair, Murray Sinclair, believes the real figure “could be in the 15-25,000 range.” 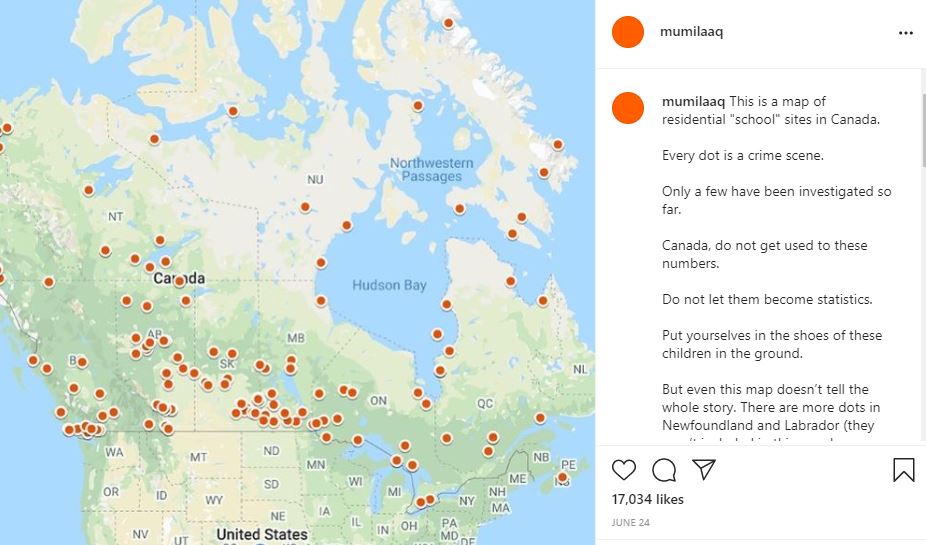 The Truth and Reconciliation Commission of Canada (TRC) launched in 2008, and part of its mandate is to educate Canadians about the realities of residential schools. In 2009, the TRC requested $1.5 million to fund projects to identify burial site locations at residential schools but they were denied.

Discovering so many dead Indigenous children sparked anger, pain and self-reflection in Canadians. It also ignited a lot of critical conversations. Some argue it’s a grossly inappropriate time to commemorate the formation of this country with things like fireworks and celebratory festivities in light of the findings.

Others point to the uncoverings as evidence that Canada’s essence is inherently violent and shouldn’t be celebrated, ever. Hashtags like #CancelCanadaDay and #NoPrideInGenocide are proliferating on social media. 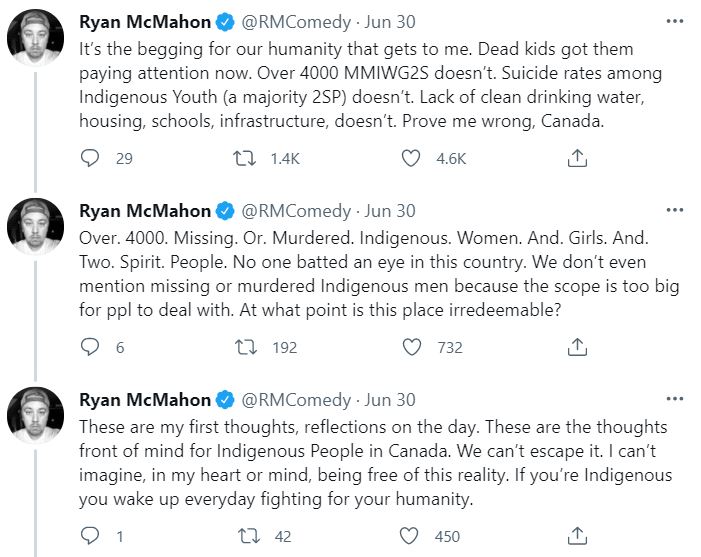 Several cities, communities, and organizations opted not to celebrate Canada Day this year. Yet, not everyone thinks our national holiday should be cancelled.

Conservative Leader Erin O’Toole said he was “troubled” by talk of cancelling Canada Day in a speech last week. O’Toole views Canada Day as a time to be thankful for “living in the greatest country in the world.”

He acknowledged Canada’s history of injustice but said he doesn’t support cancelling the holiday.

“We are not a perfect country. No country is. There is no place on this planet whose history can withstand close scrutiny. But there is a difference between acknowledging where we’ve fallen short and always tearing the country down.”

He’s probably right in saying that most countries’ histories are littered with atrocities that fail ethical standards. It’s also accurate to say that Canada is one of the best places in the world to live and that most people are glad to live here. We placed 16th on the United Nations Human Development Index in 2019, and 11th on the 2020 World Happiness Report. According to the Organisation for Economic Co-operation and Development (OECD), when asked to rate their general satisfaction with life on a scale from 0 to 10, Canadians gave it a 7.4 grade on average, higher than the OECD average of 6.5.

But the #CancelCanadaDay conversation isn’t a referendum on whether or not Canada is a good place to live. It’s about acknowledging the fact that Canada is built on a foundation of colonialism and Indigenous genocide.

The unmarked burial sites are a reminder of the terrible actions and policies that were used to create this country. That’s why July 1 and its celebrations are deeply painful for many Indigenous people.

That sentiment was expressed by Falen Johnson, a Mohawk and Tuscarora playwright and podcaster.

“To hear fiddles and celebration, to me, those are like daggers in my heart. That’s the sound of my people losing their land. That’s the sound of us being disenfranchised. And it’s a reverberation that continues today. So it salts the wound,” Johnson said in an interview on the CBC’s The Current.

#CancelCanadaDay is about rejecting the narrative that Canada is a peaceful, multicultural utopia. It’s about not patting ourselves on the back and telling everyone how amazing we are while we routinely ignore Indigenous suffering. 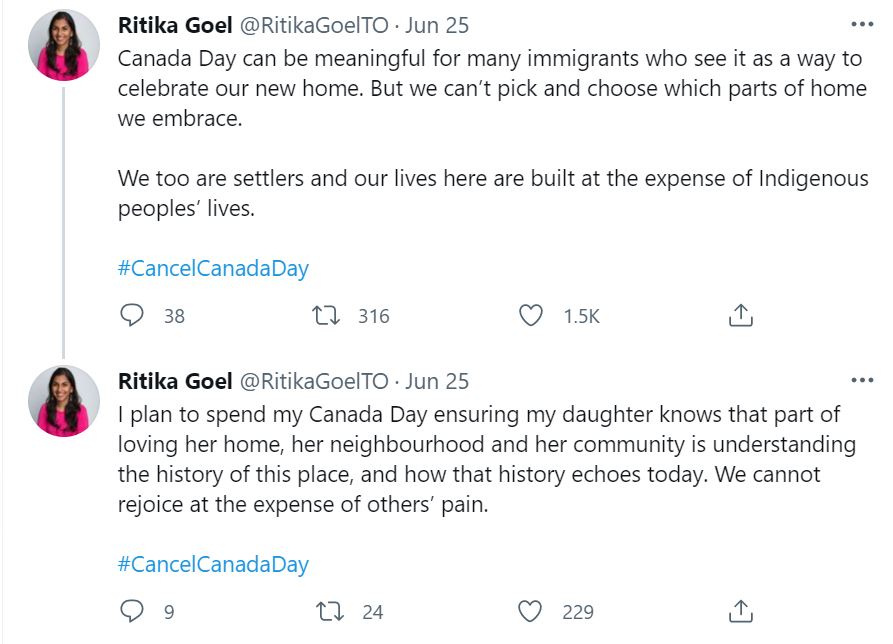 Unsurprisingly, some people’s initial reaction to the newly discovered graves was shock, sadness and assertions that “this isn’t Canada.” I’ve thought that too. Incidents of violence and racism are not representative of my personal beliefs nor are they reflective of my pluralistic childhood.

But the first step of solving a problem is admitting that there is one and Canada suffers from extreme denialism.

“If people want a society where we can embrace identifiers like ‘multicultural’ or ‘diverse,’ that requires a real critical lens and understanding of the realities of Canadians,” Henry explained.

Indigenous people are painfully aware of the realities of residential schools and colonialism but the revelations come as a rude awakening for many non-Indigenous Canadians. Particularly recent immigrants and their descendants.

Many first and second-generation immigrants view Canada as their new home and a land of opportunity. For them, it’s hard to reconcile the gratitude they feel and the new identities they’ve adopted with the guilt and shame associated with Canada’s colonialism. There’s also a sense of betrayal.

On the global stage, Canada is known for being a welcoming country, but it wasn’t always. In addition to Canada Day, July 1 also marks the day Canada passed the China Exclusion Act in 1923. It’s also known as Humiliation Day.

The Act prevented the families of Chinese men who were working on the railroad (in awful conditions) from reuniting with their families. Canada didn’t want Chinese people, just their labour. A few weeks ago, the Canadian government issued a formal apology to the Italian-Canadian community for how they treated Italians during World War Two.

How should Canada day be spent/celebrated?

Some Indigenous communities celebrate Resilience Day on July 1. Resilience Day activities include wearing orange, taking part in traditional ceremonies, and Indigenous-led educational panels. The objectives of Resilience Day are healing and reflection—which is what July 1 should be about.

We should dedicate part of our holiday to reading sections of the TRC. There were 94 Calls to Action issued in the 2015 version of the TRC, pressuring politicians to make sure they follow through on their promises next July 1. I think it’d be appropriate to make an effort to learn the language of the Indigenous communities in your area but not everyone agrees.

Before Juneteenth was made an official holiday in the States, 89-year-old Opal Lee walked from Texas to Washington DC to encourage lawmakers to officially commemorate the end of slavery in that country.

In this country, we lowered flags to half-mass for nine days following the discovery in Kamloops. We already run for causes and loved ones on Terry Fox Day. I don’t see why we can’t do something similar to commemorate residential school survivors.

People who argue that Canada Day is a time to be grateful for living in Canada miss the point that you don’t need a national holiday for that.

They ignore the fact that while Canada is a relatively safe, wealthy, democratic and multicultural country, that’s not the reality for everyone living here. They’re quick to talk of Canada’s benefits but deny that the only reason they’re possible is because of the attempted erasure of this land’s original inhabitants.

A friend of mine said that when it comes to assertions of, “This isn’t Canada,” in addition to the denial and ignorance about this country’s history, they’re about disapproval. That what some people are really saying is, “This isn’t the Canada I know and this is not what I signed up for.” If like me, that’s how you feel about Canada, then in addition to shame and guilt, we need to feel righteous indignation and demand that our government do better.