A love letter to the Queen - New Canadian Media

I had the enormous privilege to become a dual Canadian – British Citizen  last year. It was a wonderful milestone to fully belong in the land that I had adopted as my new home. During the ceremony, I swore allegiance to Her Majesty Queen Elizabeth II, Her Heirs and Successors. Tears swelled as I read the words.

It was truly a meaningful moment. I had come full circle in my life, with the Queen once again guiding me through a landmark occasion.

I began my life in Nova Scotia, the most British of Canadian provinces. As a young boy in the 1960s, who preferred pink over blue, there was an enormous sense of not belonging, of living in a world that had not yet carved out a place for a child like me.

In the accepted definition of masculinity of the day, it was difficult for me to fit into the certain expectations of how a life should be lived. Somehow, it was the Queen who gave me a place to belong.

She connected me to a world beyond my own, through a sense of history, tradition, and the vastness of the Commonwealth. I felt a bond with distant countries and far off lands; places I had only seen on a map. Her keep-calm-and-carry-on steadfastness was an abstract and distant relationship, but it was true, it was constant, and it was a comfort, then and still is today.

Our affinity as sovereign and subject was solidified. My Queen was there to keep me safe, to remind me that I and other minorities, including new Canadians, are not alone. Far from it. As the Queen of more than 50 countries in the Commonwealth, she represents one third of the world’s population.

From my earliest school days, I can remember singing: “God Save the Queen” every morning, staring in admiration at the framed black and white photograph of our beautiful queen, hanging above the chalkboards in every classroom.

Leading us in song was music coming through the loudspeaker, hanging next to the portrait of Elizabeth II. She was ever-present and always looking over us.

I became an artist and found my way in the world, as the world around me changed and became more accepting of people who didn’t fit the binary norms of my lonely childhood. Through it all, the Queen remained constant, leading these changes big and small. Her Majesty, as head of state and head of the Church of England, in signing legislation into law (Decriminalization of Homosexuality in 1967, the Marriage Act of 2013 and calling on her government in 2017 to continue to defend the rights of her LQBTQ+ subjects) has walked alongside us as we have made tremendous steps forward.

Soon, we will celebrate the Platinum Jubilee marking the 70-year-reign of Elizabeth II, the longest British Monarch to ever serve her people. It’s a momentous occasion and a rare example of someone who made a vow as a young princess in 1947 and more than seven decades later, still honours this promise.

In a radio broadcast at the time, “with a whole Empire listening,” she said: “I declare before you all that my whole life whether it be long or short shall be devoted to your service and the service of our great imperial family to which we all belong.”

I wanted to mark this occasion with my own personal gift to the Queen; a gift symbolic of the path I walked as an artist after she first lead me to the intersection of the many roads that one can walk down in a bigger world with room for us all, including people like me.

Thus, an art book was born. Duty; A Love Letter to Queen Elizabeth II, looks back at many of the moments in history when Queen Elizabeth II was there for us all, leading us through both joyful and sorrowful times. She has been our rudder for seven decades, serving as head of state at countless ceremonies, forever planting trees, opening parliaments, and helping us digest many world events as they unfolded, simply by being there.

As a Canadian speaking to Your Majesty in an era of post-colonialism, I say to you: Thank you for all you have done for the British Commonwealth, your endless dedication, and your tireless commitment to us all. 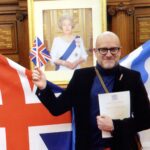 Owen Grant Innes is a Haligonian living in London. His art book Duty, A Love Letter To Queen Elizabeth II is now available in Canada.