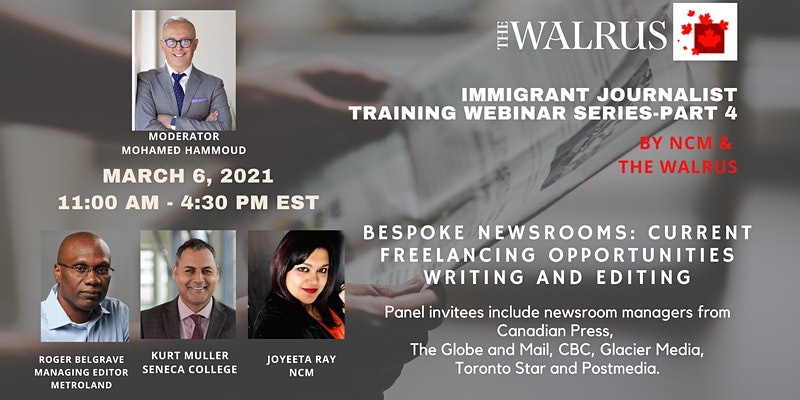 In response to feedback from previous webinar participants who wondered about how media organizations are responding to demands for greater diversity, we will feature a special panel on Bespoke Newsrooms: Current freelancing opportunities.

Kurt Muller of Seneca College will be present as keynote speaker.

Kurt Muller is the Dean of the Faculty of Communication, Art and Design at Seneca College. Prior to joining Seneca in October, Kurt was the Dean of the McKeil School of Business, and the School of Media & Entertainment at Mohawk College, where he was instrumental in the launch of Mohawk’s groundbreaking Accessible Media Production Program, and spearheaded an initiative to make Mohawk’s Journalism program more accessible to people with disabilities. Kurt spent almost 20 years working as a print and television journalist in Manitoba and Ontario. He graduated with an MA in Journalism from the University of Western Ontario and worked as a reporter and writer for CTV National News with Lloyd Robertson. Kurt was born in Cape Town, South Africa.

Roger Belgrave is an award-winning journalist and Managing Editor of Metroland publications the Brampton Guardian, Mississauga News and Caledon Enterprise. He has more than 30 years of experience in the newspaper industry, all of that time spent as a reporter and editor at Metroland community publications from Oakville to Oshawa. He has covered numerous beats, from courts and council to federal politics and education. His family immigrated to Canada from England when he was a young boy and settled in the Toronto area, where he is still based.